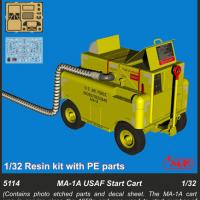 The MA-1A Start Cart (also referred to as a “Huffer”) was used by the United States Air Force as an auxiliary jet engine providing a source of high pressure, high volume air (called bleed air) to start aircraft without starters, and to start aircraft that have inoperative starters. The F-4, A-4, T-38, F-104, and A-7, just to name a few, had to be started using this cart. I have used the MA-1A many times to both start the above aircraft, and to troubleshoot/operationally check the bleed air system on the C-130 aircraft.

The kit comes with 17 resin parts and 10 photoetched parts, with molding in crisp detail. I found no fit problems with the parts, and the kit went together fairly quickly. Be careful with part number 2 with its long “tongue” at the top - I accidentally broke mine but was able to easily repair it. The body of the cart is molded in one piece.

The air duct is molded in the “pressurized” state, with the unit running and bleed air applied. There is a mistake in the instructions here, as they show the air duct running almost down the side of the cart. The hose pressurizes to a rock-hard state when the air is applied, so the best way to use this cart is in an “engine start” scene. We also had to stretch the hose out so that there was the maximum distance between the cart and the aircraft without being under said aircraft. I bent the bleed air pieces into the shape that I remembered from my time in the Air Force.

Painting the kit was easy, and I painted all the parts on their sprues. The instructions call for a glossy yellow (FS 13538) paint scheme, which was used from the cart’s introduction until about 1980. All ground equipment began to be repainted in green (I used FS 34086 as the color I remember) starting in 1981 or so. The decals will be the same on either version, and they went onto the cart easily. Take note: the intake screen (Part PE5) is not painted on the actual cart, and I left the intake screen unpainted on my model.

Overall, this kit builds up into a very accurate version of the MA-1A Start Cart.

Many thanks to Czech Master’s Kits for the review sample!