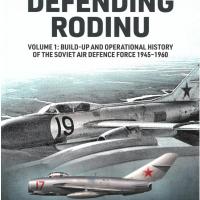 Casemate Publishing continues its series on modern conflicts in Europe with the first volume of a projected two that deals with the creation and evolution of the Soviet air defense system. As with many books in this series, it is richly illustrated with contemporary black and white photographs, maps, and a series of color profiles of Soviet and US aircraft. Using English and Russian sources, the volume provides an excellent introduction to the establishment and growth of the Soviet air defense system. Readers with a passing knowledge of the Russian language will note that in the title the authors use a different form of the familiar word Rodina or homeland. It is not a misspelling but the appropriate grammatical construction.

To no surprise, the book uses a chronological framework to tell the story of air defense, beginning with 1945 and the end of the war. The first segments lay out the development of their weapon systems – anti-aircraft guns, radar, communication systems, and interceptors – the meat and potatoes of Soviet air defense. Using captured German technology and their own know-how, by 1960 they were able to build a network along the border, around major cities and across the vast expanse of the country. One of the points made throughout the book is that given the expanse of the Soviet Union, the evolution of delivery systems for atomic weapons, and the paucity of resources that the Soviet’s had available, building a comprehensive system took nearly a generation to perfect. Until the 1960s the system was built to repel bombers carrying atomic weapons, but in reality, most of the action was generated by reconnaissance missions flown primarily by the United States.

After the first few chapters that focus on the development of a system, the balance of the book will focus on a variety of incidents, culminating with the shoot down of Francis Gary Power’s U-2 in May, 1960. The book shifts back and forth among the eastern and western borders of the Soviet Union, focusing on various incidents and incursions that occurred. Despite the lack of information or obfuscated claims seen through the ideological lens of the Soviet Union, there is one instance after another of close calls, shoot downs, or run ins. Many of the early incursions occurred in the Baltic, culminating in the shoot of a Swedish DC-3 in 1952 that was collecting intelligence. Americans, desperate for information in the days before spy satellites used adopted B-29’s and B-47’s for photo reconnaissance. There were several flights lost and the evidence points to shoot downs rather than mechanical issues. While these did not trigger a general cataclysm, it raised the stakes for the Soviet Union who, in particular wanted to prevent western overflights. This paranoia and desire to defend their airspace led to two incidents that demonstrated Soviet nerves as well as a desire to protect their airspace.

In 1958 a C-130 was shot down over Soviet Armenia. While it was on an intelligence gathering mission, it was not meant to cross over Soviet airspace. For reasons unknown, it strayed over the border and was intercepted and shot down. While explanation was lacking, the remains of the Americans eventually came home. The infamous shoot down was the Francis Gary Power’s U-2 in the Spring of 1960. President Eisenhower was nervous about U-2 overflights and knew that the U-2 was not invulnerable. The Soviets, with dogged determinism as well as improved surface to air missiles, was able to shoot down the American plane. While Power’s was eventually returned, it ended overflights and the first stage of Soviet air defense.

I am broadly familiar with the origins of the Cold War in the waning months of the Second World War. This volume underlines the rapid growth of hostility in the years from 1945 to 1950 and the aggressive American attempts to gain information through reconnaissance along the periphery of the Soviet Empire. Moreover, there were far more shoot downs and deaths of said crews then I had heard about prior to reading this volume. The author makes it clear that despite the availability of resources, many of the details of these incidents are unknown. I recommend this work for anyone with a passing interest in this period and I look forward to the next volume!