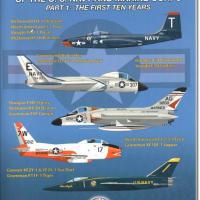 Thank you to Bert Kinzey and Rock Roszak for continuing to bring back a tremendous resource for the modeler and aviation historian in a print-on-demand format. Thank you to the IPMS Reviewer Corps for allowing me to review the latest Detail & Scalepublication describing history, details, and versions of early USN and USMC jets and related aircraft carrier design changes. The official title is Jet Fighters of the U. S. Navy & Marine Corps, Part 1: The First Ten Years. The second volume is due for release later this year.

The publication is an excellent compilation of the early jets that served, or in some cases did not advance to serve aboard USN carriers. Only jets with a fighter mission are covered. The first seven aircraft chapters describe straight-wing designs (first generation), and the remaining chapters cover swept-wing designs (second generation), including some X-planes. The first chapter chronicles adaptation, modifications, and new carrier innovation demanded by jet operations. This carrier chapter gives important context to the following jet chapters. I found all of the information fascinating, and I certainly learned a thing or two. This publication is part 1 of a 2 part series;Jet Fighters of the U. S. Navy & Marine Corps, Part 2: Mach 1 and Beyondis expected to be available later this year.

The print volume has contains 113 pages, 220 high-resolution photographs, including 115 color images, and 16 full color profiles. The print format retains the cherished look and feel of the original Detail & Scale series, and this new volume fits right in with my vintage collection. Three of the aircraft are subjects of other Detail & Scale digital volumes, available now or soon to be available in print and digital format.

The front and back covers are glossy cardstock with full color images, and the pages are matt finish on standard weight paper, like high-quality copier stock. Images are high-density gloss, in color or grayscale. The binding is very strong, and did not separate even when folded completely out. The paper took ink and highlighting very well, without smearing or bleeding. Paper sticky notes (you know, those things you use for masking) did not bring up any text or degrade the images. I believe these pages are printed using high-quality color laser printing technologies.

Front Matter: The covers continue a Detail & Scale practice of a colorful content “teaser” with superb color profiles by Rock Roszak. Following the table of content on page 1, a list of contributors and sources fills a good part of a second page, and is a testament to the thoroughness of the volume.

Foreword: The historical background for Part 1and the upcoming Part 2is from the scale-modeling world. Two very popular subject booklets were included with Revell’s F9F Pantherand F-14 Tomcatkits. The booklets had to be limited in size and scope. The booklets’ popularity led Detail & Scale to develop bigger and more thorough coverages of USN jets.

Introduction: A brief history of jet development provides great context for the following chapters. Adapting a new power plant to military aviation was difficult enough, and the USN had additional challenges of making the new power plant work with carrier-based aircraft. This paradigm shift would drive significant changes to both aircraft, and aircraft-carrier design. The successes and failures of first and second-generation aircraft design are briefly touched on, adding to the subsequent chapters that cover each aircraft in more depth.

Chapter 1 Fighters - U. S. Aircraft Carriers in the Jet Age: The task of adapting jet fighters to carrier operations became immediate and more complex with the onset of the Korean War. The U. S. Navy hadEssexand Midwayclass carriers readily available, and was able to operate first-generation jets on straight deck carriers, an arraignment that I would consider terrifying for flight deck personnel. Modernization programs included removal of armament to make more room, strengthening of elevator and flight decks, and increasing fuel capacity, among others. The last design elements were addition of steam catapults and the angled deck. These changes were retrofitted to varying degrees to existing carriers. The first carrier to incorporate all of these design changes from the keel-up was the USS Forrestal, CVA-59, commissioned in 1955. Current USN carriers have changed little from the Forrestal, in comparison to the radical changes made to the carriers on hand post-WW2. It is an interesting side note to see V-22 Ospreyand F-35C Lightning IIoperations today aboard straight deck LHD class ships. Perhaps another paradigm shift has happened.

Chapter 2 McDonnell FH-1 Phantom: The Phantomwas a breakthrough for the McDonnell Aircraft Corporation. The company served as a subcontractor to larger aircraft manufacturers throughout most of WW2, but was able to secure the first USN jet project. The propeller-design lineage is evident, however here the first jet adaptation is apparent, tricycle landing gear. Downward-directed jet blast has a bad effect on wood flight decks! Many images of the FH-1 effectively show the operations of this jet.

Chapter 3 North American FJ-1 Fury: The straight wing Furywas not suitable for carrier operations. The aircraft did not have folding wings. However, a “kneeling” nose gear allowed more compact spotting in tight quarters. The Furywas the last US jet to carry machines guns, before larger caliber cannons became the norm. Nearly all of the FJ-1s ended their service lives in training duties or the Naval Reserve.

Chapter 4 Vought F6U-1 Pirate: Vought was selected to develop a jet prototype at virtually the same time as North American was selected to do the same project. There are at least two reasons for this redundancy, 1) Vought had plenty of experience with carrier-based fighters, and 2) the Navy wanted a back-up plan in place. The F6U-1 and the FJ-1 were very similar, and the Piratewas not accepted for carrier trials.

Chapter 5 McDonnell F2H Banshee*: The Bansheewas very similar to the earlier FH-1 built by McDonnell, with significant improvements in power and armament. Furthermore, folding wings improved deck handling. Unfortunately, the wings had to be extended before the wingtip tanks could be filled. Nonetheless, the Banshee enjoyed considerable success and was arguably the first successful USN shipboard jet fighter, which also had some ground attack capability.

Chapter 6 Grumman F9F Panther: The Pantheris considered the best first-generation carrier jet fighter of its time. This success is largely due to a powerful and highly reliable engine coupled with the extensive carrier aircraft experience of Grumman. The design progressed through fully five variants. Pantherssaw extensive combat operations in the Korean conflict, operating in a variety of roles with both the Navy and USMC.

Chapter 8 Douglas F3D Skyknight: The F3D was designed as a night fighter, with a side-by-side crew configuration requirement. It was the last of the USN first-generation jet fighters, but a leader in radar capability and crew comfort. The ejection system was simple; hop into a “laundry chute” that exited the bottom of the aircraft. The Skyknight saw combat in Korea, and served out its useful time in training units.

Chapter 9 Vought F7U Cutlass: The unusual and unique F7U variants marked the arrival of second-generation jet fighters in the ranks of USN aircraft. Delta wings, unique control surfaces, twin tails, and a long nose strut are all distinctive features. The moniker “gutless” is often associated with the Cutlass. Test pilot and astronaut Alan Shepard said that the F7U had the best performance of all contemporary USN jet fighters, and that all of the jets were underpowered. Sadly, the Cutlasshad the worst accident rate of all USN jets fighter. Nonetheless, the many lessons learned followed in later aircraft designs.

Chapter 10 Douglas F4D-1 Skyray: Unusual design innovations continued with theSkyray’s modified delta wing and single tail. The F4D had a very high rate of climb, and was an all-weather interceptor. The thought at the time was that guns were obsolete and only missiles were required. Most Skyraysflew with Sidewinder missiles or rocket pods.

Chapter 11 McDonnell F3H Demon*: The F3H was another radical, yet traditional design. The wings and tail surfaces had a 45-degree sweepback, with a single engine and exhaust underneath a high empennage. Engine problems were frequent, and lack of power plagued the Demon. Radar capability improved among the variants, and the Sparrow missile was effectively deployed on the Demon. The USMC or the Reserves did not use theDemon.

Chapter 12 Grumman F9F Cougar*: The Cougarevolved directly from the Panther, with the transition occurring at the F9F-6. A change to swept wings greatly improved performance, as did several other “tweaks.” Transonic flight problems during diving (the Cougarwas not supersonic) were mostly resolved with a “flying tail.” The Cougarperformed very well on straight-deck and angled-deck carriers. Other variants included aerial photography and two-seat advanced trainers. Cougars remained in service for nearly 20 years after introduction, a testimony to durability and sound design.

Chapter 13 North American FJ-2, FJ-3, & FJ-4 Fury: The second generation of the Furyresulted from an option that North American had when developing the FJ-1. The aircraft design specification included straight or swept wing option. The Navy was rightly concerned about low approach speeds of carrier landings and opted for the straight wing, whereas the Air Force had no such landing speed constraint, preferring the higher-performance swept wing. When faster approach speeds became less of a concern, the Navy added additional requirements, such as folding wing, catapult and arresting gear, and a longer nose gear. The new requirements degraded the performance advantages some, and were addressed through later variants. The FJ-4 variant remained in service into the 1960s.

Chapter 14 Grumman XF10F-1 Jaguar: The Jaguarwas radical at the time, with variable geometry wings. Grumman’s work was not the first attempt with variable geometry flight surface, but it was by far the most complex. The design history of the XF10F-1 is a fascinating adventure and journey in engineering and design. The Jaguarnever went into production, but all the experience gained was carried forward into a very famous descendent, the F-14 Tomcat.

Chapter 15 Convair XF2Y-1 & YF2Y-1 Sea Dart: The idea of a jet fighter seaplane had roots in WW2 reconnaissance aircraft, such as the Kingfisher. No propeller implied no floats, less drag, and higher performance suitable for a fighter. A simple delta wing seaplane hull with a pair of dorsal jet engines was proposed. However, the apparently simple idea had many challenges, and the unique Sea Dart program did not last.

Chapter 16 Grumman F11F-1 Tiger: The Tigerwas intended to be an upgrade of the Cougar,but ultimately became a unique aircraft. The Tiger was not particularly successful in the fleet, however its excellent flight characteristics led to extensive use by the Blue Angelsand in training units.

Detail & Scale’s new and upcoming publication information is found on page 112. The author and illustrator biographies appear on p. 113.

Content coverage summary: I found the volume’s organization to be excellent. The initial chapter on carrier design and adaption sets the stage well for understanding the failures, struggles, and successes associated with getting jet power to sea. The chapter order brings the reader through a near chronologic succession of designs, capturing a unique period of aviation history.

In terms of content, this is another exceptional publication. In addition to the tremendous wealth of photographs and other information, this volume reads very well, with an engaging style. The artwork is spectacular, the resolution of the photographs is superb, and the variety of images make Part 1invaluable. I am very anxious to get ahold of Part 2!

Detail & Scale Jet Fighters of the U. S. Navy & Marine Corps, Part 1: The First Ten Yearshas my highest recommendation. I cannot find any negatives in this publication.

Thanks again to the wonderful folks at Detail & Scale! I am very pleased to see the print–on-demand volumes being released, and I’m sure I echo the thoughts of the modeling community in saying I hope to see many more published. Thank you again to the stalwart Reviewer Corps for your hard work in making these review opportunities happen!

Back cover, with superb color artwork

Example of a color profile paired with the subject

More of what’s available, including a “teaser” for Part 2!
Previous Next