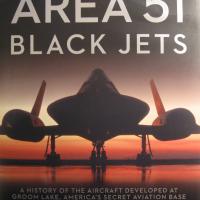 Thank you very much to Nichole at Quayside Publishing Group, the parent corporation of Zenith Press for providing this book for review. Thanks are also due to the IPMS Reviewer Corps for allowing me the opportunity to explore a wonderful documentation and fascinating historical description. Author Bill Yenne has struck an excellent balance of historical facts and data woven together in a great story. I found the entire book to be engaging at all times. The book is not just a valuable reference; it is a great read as well. I remember building the Testors F-19 stealth fighter a long time ago when it first came out. I was disappointed when the F-117 Nighthawk became public a few years later, but after reading this book and seeing prototype photos I believe that Testors was not as far off as many may think, nor were Tom Clancy and Larry Bond in their description of the Frisbee in Red Storm Rising.

Area 51 Black Jets was officially published on 15 MAR 14 but was released a little earlier. On opening the book you will find 192 glossy pages filled with text, 140 color photos, 90 black-and-white photos and 18 diagrams. The hardcover binding is 8.25 x 10.25 inches and sports a colorful dust jacket showcasing the enigmatic SR-71 nose-on. In 14 chapters with supporting material Mr. Yenne covers the history of both Area 51 and the aircraft that came to life there. I appreciate the extensive bibliography and helpful acronym list.

After a well-done prologue summarizing the allure and history of Area 51, the first full chapter pleasantly surprised me. I did not expect to see the early pre-aircraft years described in much detail. The unnerving succession of mushroom cloud photos and descriptions of the Nevada Test Site just to the south of Area 51 adds serious support to why Area 51 is where it supposedly is! The following chapters all build on this secretive location, explaining the ideal fit of the Lockheed Skunk Works with Area 51. Possible sources of UFO sightings and the like are suggested in many places throughout the entire book.

Next, development and evolution of the U-2 is covered in depth. The quality of photography and narrative is excellent. I particularly appreciated how the evolution of the U-2 from a legendary spy plane to its descendant TR-1 is discussed and detailed. The shortcomings of the U-2 provide an excellent introduction to the next few chapters that describe development of the SR-71 and its ancestors, including the quixotic D-21 drone that rode piggyback on the A-12 variant. The information in the photos and text is superb, better than anything I’ve seen on this subject. As if the development of new secret aircraft wasn’t enough, a MIG squadron came to operate at Area 51 in support of dissimilar aircraft training at Red Flag and Top Gun. Tonopah, NV, came to be known as a place to go for seeing unusual aircraft.

The remaining chapters describe the also legendary F-117 stealth “fighter” from a design, prototype and operational perspective. Area 51 Black Jets became very real me at this point. I spent some years as a geologist in Nevada during the early 1980s and remember seeing some distant aircraft that just didn’t look rational. I suspect I would be even more surprised today, after absorbing the remaining chapters about current and future projects. The line between operational and theoretical becomes tantalizing more indistinct in following chapters, with mention of Aurora, Black Manta and other projects. UAVs and the Bird of Prey program are touched on and forward-looking visions and concepts tweak the imagination. Mr. Yenne concludes the book with acknowledgment of those who brought Area 51 and the resident aircraft to life. A local resident near Area 51 summed up the book for me (p. 183), as it was intended by Mr. Yenne: “The events and unidentified flying objects we see and only hear at times in this area often leave us shaking our heads. The unknown is what we live for. The times when logic escapes us and the knowledge of things to come are before us.”

I recommend Area 51 Black Jets highly, as it touches on many parts of the hobby that resonate deeply with me. Thank you again to Nichole at Quayside Publishing Group for providing a review copy For the folks in the IPMS Reviewer Corps, thank you for giving me the review opportunity, and especially thanks for all the filtering, edits, and other tech wrestling you do to make this program happen.