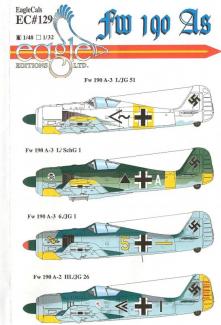 Eagle Editions is notorious for everything Luftwaffe and their expertise is world renowned so this latest release from them is very welcomed.

This sheet features four FW-190As, three A-3s and an A-2 and is also available in 1/32nd scale for the new Pacific Coast Model. Printed by Cartograf the decals are thin and respond well to any setting solution, this single sheet is quite colorful. I’ve used the Microscale system, Gunze Mr. Mark Softer and Walther’s Solvaset on Cartograf decals before without any problems. The decals are printed in perfect register and contain the markings for the four aircraft and stencils for one complete aircraft. My sheet contained swastikas but overseas buyers may or may not receive them depending on your local laws. 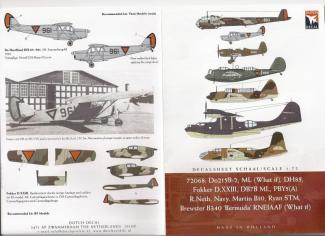 This is a Dutch product, dealing with some Dutch aircraft using the orange triangle marking during the early part of World War II. Two, the Dornier DO-215B-2 and the Brewster B340 Bermuda, were apparently ordered but never delivered, so they become part of the “What If?” category, much like Luft 46. The others, including the DeHavilland DH-85, Ryan STM, Martin B-10, Consolidated PBY-5, and Douglas DB-7, were actually delivered and used, at least at the beginning of World War II. Some of the Ryans, by the way, were evacuated to Australia in 1942, and I had the opportunity to fly in one of the survivors, then privately owned, while I was in Sydney in 1962. Therefore, I’ve got to build that one when I get another MPM kit. 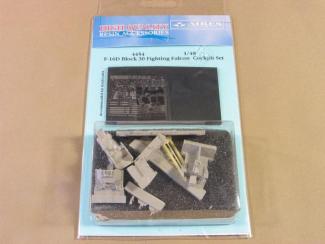 For those resin aftermarket aficionadoes among us, Aires never fails to satisfy. Set #4454 provides a full resin cockpit for Hasegawa’s F-16D kit. Though the Hasegawa kit is not the latest kit available, it is still a good kit and by some accounts more accurate in shape than other offerings. The kit does suffer from a very basic cockpit, so this is where the Aires set will dress it up nicely.

The set comes in the common blister back and comprises of fourteen resin parts, two of which are extra control sticks. Also included is a small photo-etch fret with a dizzying amount of tiny parts and one printed acetate for instrument dials. As to be expected from Aires, everything is finely cast with no bubbles or imperfections. 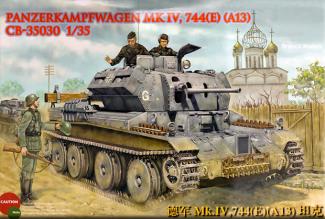 This kit represents a Cruiser Mk IV A13 captured from the British Army during the Battle for France in 1940. The Germans used the vehicles as gun tanks to support their flame tanks for the invasion of the Soviet Union. The box contains the following parts. 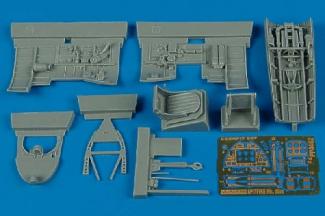 The Academy Spitfire Mk.XIVc is a really nice kit but it is let down by the cockpit. Aires rectifies that with this new set. Molded in light grey and tan resin that is blemish and bubble free the amount of detail is impressive. The casting is flawless and some of the undercuts are really deep. I don’t know how they can do it. Besides the 12 pieces of resin there is a film for the instruments and a fret of photo etch. The breakdown is logical and well thought out.

The hardest part of the whole conversion will be the need to thin down the side kit sidewalls. Everything else is just as simple as removing the parts from the pour stubs and assembling them. The resin parts are precisely made and look fantastic. If you have this kit you’ll want this interior.

Simple yet effective, this interior will add immensely to the Academy kit.