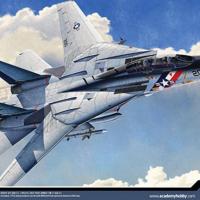 When I first saw the box, I was hoping for a brand new 1/72nd scale F-14A. But alas, the only thing new was a splendid Cartograf decal sheet. This is the same kit that has been receiving new decals since 2011 in an attempt to revitalize it. I believe the basic kit dates back to 2008, or earlier, and basically is a factory issued aircraft, with no modifications or upgrades.

There are three light gray sprues and a clear sprue. You are given all of the weapons you could ever want: 4 AIM-7 Sparrows, 4 AIM-9L Sidewinders, 4 AIM-54 Phoenix, and one TARPS pod. You also get two external fuel tanks. Both types of wing glove pylons are included in the kit, so you can mount either AIM-54/AIM-9L or AIM-9L/AIM-7 configurations. I opted for the latter so I could mount all four Phoenix missiles. The Phoenix missiles are the only weapons that do not suffer from prominent ejector pin marks. They can be filled and cleaned up, but it’s a lot of extra work. The clear sprue consists of the windscreen, canopy and landing light.

Construction begins with the cockpit, which is very austere and very basic. Nearly all of the detail is via decals. The scopes are raised and there are no side panels at all. This results in a large space between the fuselage sides and the side consoles. This is not too bad, however, because there is no option for displaying the canopy in the open position. With the canopy closed, you won’t really be able to notice any gaps. The ejection seats are basic with no representation of lap belts. The seats look somewhat like ejection seats, but each seat side has two rather large ejection pin marks that need to be cleaned up. When painted up, they look okay. When installing in one fuselage half, you need to join the two halves and move the nose gear well around to get the whole assembly properly aligned before gluing. There is only a shallow depression to use for alignment.

The wings need to be assembled prior to joining the upper and lower wing halves. A couple of things are essential. The wing glove vanes have to be trimmed so they will fit flush and the trailing edges have to be thinned down to get a good fit and some realism to the join. I could not get the wing glove vanes to extend properly with the wings in full sweep, so I glued them flush with the leading edge. The holes in the wings had to be enlarged to enable them to sweep easily. A third or a fourth hand would come in handy when joining all of these parts together to make the fuselage assembly. I used tape, instead, and finally got everything to go together. This was done after a lot of trimming and dry fitting, however, to ensure a good join. I had a slight gap at the front of each join under the wing, but nothing great.

The nose assembly is rather simple, but alignment is somewhat of a guess and a hassle. The instrument panels do not sit very well and have nothing to really align them. The nose gear well, which has eight very prominent ejector pin marks is the only positive means you have for lining up the cockpit tub to the fuselage halves. The pin marks are difficult to fix and they are in the middle of the plumbing or on structural members of the wheel well. After doing what I could with plastic sheet disks inserted in the holes, the result was acceptable and looked okay after painting and washing.

The vertical fins require a lot of attention, as the mounting slots are about twice as big as the mounting tabs. And, there is nothing to really give you any sense of alignment. Reference pictures here are a must. I built up the thickness of the tabs and once glued in place, I had to use filler to close the gap on both sides. The burner cans are extremely shallow, but the exhausts look okay. I left off the cans and the external parts until after painting and decaling were done.

The last thing prior to painting was installing the canopy. . The fit here is not great, as the canopy is narrower than the frame. Once you get that done, you find that the frame does not fit the fuselage opening. I managed to get it close enough to look okay and then glued everything together and masked the canopy using Tamiya tape.

I used Alclad’s grey primer to point out any flaws before using Mr. Color 308, FS. 16440 for the overall finish. It really goes on nicely, dries quickly and also sands nicely. I used Tamiya’s X-20 clear for my decal preparation. I have always preferred it over Future. I did not use any pre-shading, as all pictures I saw of VF-102’s F-14s showed them pretty clean and well maintained. The same goes for the wheel wells. I saw very few that were overly dirty. Once everything has dried for 24 hours, I started the decaling, which I did in four evening sessions. These were some of the nicest kit decals I have ever used. They lay down extremely well, and in most cases did not require any setting solution. You have to have the area very wet, however, because they like to stay where they are first put. The AIM-54 decals were really nice and went on nicely and fit perfectly. There are lots of stencils on the aircraft, but they all went on exceptionally well, too. The decal placement guides are small, in black and white, and show panels in different places than they are on the model. Once again reference materials are an asset. Some of the decals are numbered incorrectly, as well, primarily the red turbine path danger lines. I finally got everything to go down properly.

After everything had had plenty of time to set and dry, I followed with another coat of Tamiya X-22 clear to seal the decals. I then used India ink to bring out the details and do a little bit of dirty work. Once satisfied, I then used Testor’s Dullcoat, thinned with Testor’s metalizer thinner as the final finish. Now it was time for all of the hangy-down things.

The external stores are very nice. Other than the ejector pin marks I mentioned, he only issue I had was with the AIM-7 profiles. They were oval, instead of round, plus I could not get a proper alignment of both the AIM-9 and AIM-7 on the external store. When the decals are applied, the AIM-54’s look every bit the part.

The landing gears are not the best fitting in the world, but can eventually be placed in a satisfactory manner. The nose gear is not bad at all, except the spacing of the nose wheels looks a little wide, to me. The nose gear doors require a lot of fiddling with to get them into place anywhere near the way the real doors fit. There is not much bonding surface for gluing the doors to the gear well. I really had a lot of trouble with the main gears. The mounting holes were twice the size of the mounting lug. I used 5 minute epoxy to secure the gear in place so I could continually adjust the positioning. The fit on the gear support was anything but easy. There are holes where the front of the support should go, but no corresponding tab or nub. I couldn’t get them to line up with the mounting holes, anyway. The main gear doors were another lesson in futility. The mounting surface area was an issue here, too.

In the pictures you will notice that the pitot tubes are missing. I had not added them at the time of the photo session, because there are no mounting holes and no mounting pins. Once I figure out just how I’m going to attach them, they will go on.

Overall, the model is a nice depiction of an early F-14A and makes a nice addition to one’s collection. None of the flaws or distractors cannot be overcome and you can build a very respectable final product. I’d like to thank Model Rectifier for the review sample and IPMS/USA for the opportunity to review the kit.

When I first saw the box, I was hoping for a brand new 1/72nd scale F-14A. But alas, the only thing new was a splendid Cartograf decal sheet. This is the same kit that has been receiving new decals since 2011 in an attempt to revitalize it. I believe the basic kit dates back to 2008, or earlier, and basically is a factory issued aircraft, with no modifications or upgrades. There are three light gray sprues and a clear sprue. You are given all of the weapons you could ever want: 4 AIM-7 Spar

When I first saw the box, I was hoping for a brand new 1/72nd scale F-14A. But alas, the only thing new was a splendid Cartograf decal sheet. This is the same kit that has been receiving new decals since 2011 in an attempt to revitalize it. I believe the basic kit dates back to 2008, or earlier, and basically is a factory issued aircraft, with no modifications or upgrades. There are three light gray sprues and a clear sprue. You are given all of the weapons you could ever want: 4 AIM-7 Spar