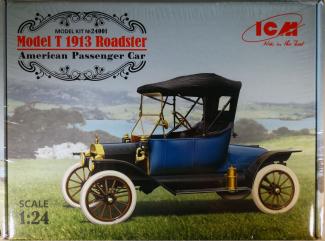 ICM has produced a little gem – an extremely authentic, well-engineered, gem of a model.

First of all to introduce myself a bit. I have been palling around with my wife and her parents around for the past twenty-eight years, and her family has owned a Ford Model T since my wife was a young child. Between our two families, we own three Model Ts, one of which a 1914 Touring, not unlike this 1913 Roadster. My father-in-law, Jim, restored a T in the early 1970s, and Jim and I restored my wife’s 1926 T in the 1990s. I bring all of this up to illustrate that we’ve spent enough time under these old rigs to know where not to step after one has been parked for a while.

The Model T was the first mass-produced automobile. In 1913 over 170,000 Model Ts were produced; an average of one Model T rolled off the assembly line every 185 seconds. For production to maintain levels that high, everything had to be done at breakneck speed, including painting. 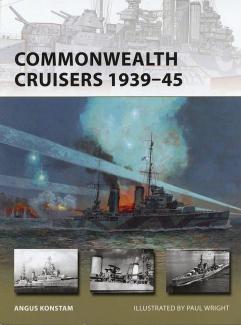 From the very beginning of the Second World War, Great Britain was aided in her naval war against the Axis Powers by officers and sailors of her former colonies, or Dominions, as they were formally known. In this Osprey New Vanguard edition, naval historian Angus Konstam begins by describing the somewhat complicated arrangement of how Britain’s former possessions were differentiated as colonies, protectorates and Dominions. Dominions, known as Commonwealth Nations after 1926, were described as “autonomous communities within the British Empire”, and were to varying degrees, responsible for their own defense, yet were expected to contribute to the overall defense of the empire as a whole. 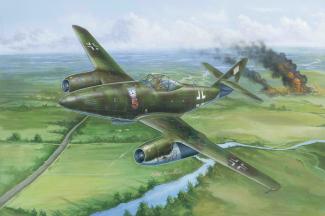 HobbyBoss has released a hypothetical production variant of the Me-262: the A-1/U1 version. Is this a Luft’ 46 model? Some might say yes, but the truth is that both the enhanced nose weaponry (MG 151 and Mk 103) and the X-4 missiles were all manufactured before the end of WWII. I would say this is a Luftwaffe ’45 “2nd-Half”.

The kit comes in 12 grey sprues, 2 clear sprues for the canopy and a metal nose wheel well to prevent having a ‘tail sitter’. The sprues are cleanly molded, free of flash and with well-defined recessed panel lines.

The model has a full interior consisting of a nose gun bay, fully detailed cockpit and main landing gear bay plus a nicely detailed back fuselage (with a radio set and a compass set). However the detail in the back fuselage is pretty much impossible to see once the model is finished. There is only one service panel and it is not large enough as to allow viewing of all that detail. 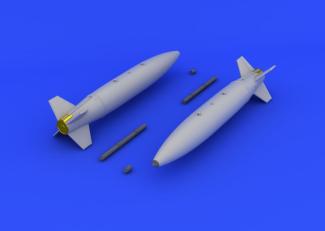 The Mk. 84 general purpose bomb is a 2000 Lb. weapon which can be configured with different fins and fuses depending on its mission at the time. In this iteration, Eduard has provided a Mk. 84 with retarded fins, I believe based on the BSU-50/B parts to allow lower release and the plane to escape the blast radius.

Eduard’s set comes with two main bomb bodies, three styles of fuses, a photoetch fret with two pieces, decals, and instructions. Construction is simple- take your time and cut the main body away from the pour stub being careful of the rear fins. Sand smooth and add the photoetch to the rear. After that, all that is needed is to select the fuse type. The fuse can actually be added after the painting.

Color is simple with olive drab being the main choice. The decals are well done and settle very well. A little wash to accentuate the well molded details followed by a flat coat and done. 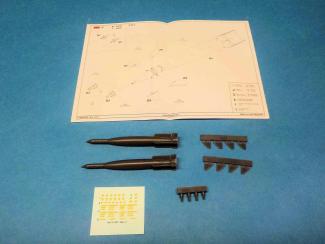 The GBU-10 Paveway II laser guided bomb is a modified version of the Mk. 84 general purpose bomb with added fins and guidance system. Eduard has produced a set of two GBU-10’s in 1/48th scale. Each set has two bomb bodies, separate front fins for 8 parts and two sets of seeker heads for the front; one ready for use and one with a cast in cover. Casting is perfect and in standard Eduard dark gray resin. Also included are the instructions and a decal sheet with all the markings.