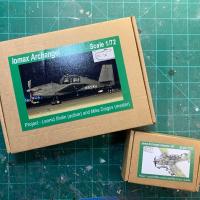 Based in Latvia, Croco is a small resin operation specializing in highly esoteric WW2 and post-war armor and aircraft subjects, though they are branching out into other subjects such as hovercraft

The Iomax Archangel is designed to be a low-cost combat aircraft based on a highly modified Thrush 510P cropduster. Upgraded with additional fuel, the aircraft has a demonstrated loiter time of up to 10 hours, The Archangel has been marketed as a platform for counterinsurgency, counterrorism, counterdrug, counterpiracy, and even border patrol. Interestingly enough, the predecessor to the Archangel, the Iomax Border Patrol Aircraft (BPA), was originally based on a modified AirTractor AT-802i cropduster, was exported to the United Arab Emirates, where it saw action in Egypt, Libya and Yemen. Using lessons learned from the BPA experience, Iomax debuted the newer Archangel, where a further 24 airframes were sold to the UAE.

As with any resin kit, this has quite a few challenges. The layout is similar to most aircraft kits, but very careful planning and test fitting would prevent some headaches down the road.

The aircraft kit has 97 parts, although that includes a spare vacuform canopy and an extra set of leading edge light covers. Parts are well cast, and surprisingly some really tiny, brittle pieces like bracing wires and tailwheel strut, made it off the casting block. I did have to replace some parts due to my concern of them breaking during handling (see notes below).

On the other hand, the large parts have very good detail. The panel lines are engraved. I was quote enthralled with the wings – they were very detailed, solid, and had a very fine leading edge.

The canopy is quite large and has a lot of glazing. It was the hardest piece to place on the kit, since I had to trim it to fit over the cockpit, and the flexing acetate made it challenging to fit properly. I used jeweler’s glue to attach the canopy, then use Mr Surface to till the gaps, sanded down the seams, then engraved the surrounding detail. That alone took two days to finish, but since it was quite a prominent piece of the model, I felt it was necessary to take the time.

For those planning on building one, I’ve put together a few pointers that might save you some headaches:

Decals are nicely printed, with markings for four prototypes – I ended up using N822KH, which is the one depicted on the box image. The instructions do not tell you which markings to use, so you’ll have to do some research on the specific aircraft you’re modelling as they all have subtle differences in markings. The decals laid out without any trouble and settled well with Walther’s Solvaset.

The weapons set, sold separately, contains 2 GBU-58s, 1 GBU-12, 1 Cirit rocket pod, 2 ECM pods, 2 AGM-114 Hellfire missiles, a pylon with three small missiles (I think they’re UMTAS AGMs), and a pair of Terma self-protection ECM pods. The set also contains three sets of dual pylon racks, a pair of rails for the Hellfires, and a photoetch fret containing the fins for all of the weapons (64 fins of all shapes and sizes!). All that comes up to a whopping 101 parts – more parts than that of the kit!

The parts are cast quite nicely, but I noticed a few issues:

I opted for the prototype scheme so I could add some more color to the model, painting the bomb bodies blue. As I could not cut the Paveways out without damaging the item, I ended up using Paveways from a Hasegawa weapons set. I also left out the forward fins on the Hellfires as the position and size were off. My final configuration looked a lot like the ones in the promotional material.

Overall, this is very a nice model of a very uncommon aircraft, and would definitely stand out on your 1/72 flightline. It’s quite a tough model to build, and you definitely want to have a fair amount of experience building resin models to do this. It’s easier to build than a Unicraft kit, but harder than Anigrand products. It’s definitely something for the experienced crowd.

As hard a time I had building this, I knew where I stood by the time I was done. I’m not master modeler by any means, but I know I’ve acquired enough skills and experience over the years that I could take risks and pull off some crazy things to get things done. I proudly proclaimed my superiority over resin with my chest out about the house, proclaiming my victory, but my wife just rolled her eyes and my daughter just went back to munching on her carrots. These kits aren’t easy to find, but I’d recommend sourcing them from eBay, Hobbylink Japan, Hannants or AviationMegastore if you want one. They’re only limited to 100 sets though, so act quickly. Thanks to Croco for the opportunity to build a model of this unique aircraft.