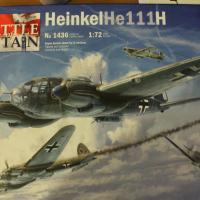 The Heinkel HE-111 was probably one of the most produced medium bombers used by the Luftwaffe during World War II, and a few ex-Spanish variants are still flying in various places throughout the world. Originally designed, deceptively to appear as a civilian airliner, in the late thirties, it went into production as a high speed medium bomber, and went through extensive modifications over the years, serving the Luftwaffe until being replaced by the more advanced Junkers JU-88’s and Dornier DO-217’s late in the war. Numerous variants were produced over the years, differing in wing platform, powerplant, fuselage arrangement, armament, and other features.

The HE-111 served the Luftwaffe as a high speed medium bomber from late 1936 until production ended in 1944. The type was used as a medium bomber, torpedo bomber, reconnaissance aircraft, transport, trainer, glider tug, and numerous other functions, until it was finally replaced by better performing types, such as the Junkers JU-88 and Dornier DO-217. There are many references that outline the developmental and operational history of the type, so I won’t go into detail. Over 7,300 were believed to have been built, and in addition, about 130 were built in Spain for the Spanish Air Force after the end of World War II.

The Heinkel HE-111 is covered in numerous texts dealing with the history of the Luftwaffe. William Green’s Warplanes of the Third Reich has excellent information on the type, In addition, the Squadron In Action series has two publications, #6 and #184, which outline the developmental and combat career of the type. Both, incidentally, also cover the HE-111Z. the five engine composite type intended as a glider tug for the Messerschmitt ME-321. Incidentally, Italaeri also produces a kit of the HE-111Z, although I haven’t built it yet. So there is no lack of information on the HE-111, and much is available on line.

The kit comes with 6 pages of detail instructions showing how to assemble the model, and five pages of color four view drawings showing the five variants that can be built using the standard kit decals. The instructions begin with a brief historical account in six languages, and warnings not to allow any modeler under the age of 14 to try to build the model. Page 2 gives a detailed sprue diagram and color guide, while pages 3-through 6 provides exploded assembly drawings showing how the model goes together. They also include interior color details.

The decals provide markings for five different aircraft, and in general include about everything that is needed to produce a good model. Aside from side fuselage crosses that to me seemed too big, there are no tail swastika markings, a common problem with contemporary Luftwaffe subjects. However, there are plenty of aftermarket swastikas available, or I suppose you could use a Confederate Flag tail marking if you are feeling particularly politically incorrect.

The color drawings in the instructions provide about all the information you will need, and the decals include nearly all of the detail maintenance markings common to most military aircraft. These are coded, and locations on the model are shown accurately. These drawings also give accurate color and marking information, and the decals do not have to be trimmed, making application much easier.

This kit has been around for a long time. I have one in my display cabinet that is listed as having been built in 1979, and looking at the old model, it is exactly the same kit. Molding is in soft grey styrene, with raised panel lines. If you are particularly ambitious, the panel lines could be removed and replaced with scribed lines, although the overall effect I think is just as good if you leave things the way they are. Fit is basically good, although I found the right wing required some filler to get things lined up properly. There are a LOT of parts in this model, and with five variants, there are lots of parts to get lost, and quite a few that you will not use.

The single decal sheet provides excellent decals that require no trimming. The only problems I found I have already mentioned, fuselage crosses that are slightly too large, and an absence of swastikas. The decal spares box solved the fuselage cross problem, so no big deal. The decals go on easily, although you need to get them out of the water quickly and on the surface before they curl up. If they do curl up, and several of mine did, they are relatively easy to straighten out. A thin coat of Micro Sol helped the decals snuggle down to the surface.

Website lists this as an old kit with new decals.

Assembly is rather straightforward, with parts usually fitting properly without any problems. The instructions are very helpful, and the extra drawings showing the different bombs and armament systems are useful. I used pure MEK for my assembly glue, and also held the parts together with masking tape until they were dry. The seams were noticeable, but they could usually be sanded or scraped down without undue effort. Assembly, in short, was not difficult. Actually, it was one of the more pleasant kits I’ve built over the past few years, and for a kit of this vintage, that is remarkable.

One issue is the steps in the assembly process. I left the small clear plastic gun positions off until the last, and assembled them with guns attached. The engines were very well represented, and were very easy to construct. I painted them before attaching them to the already painted airframe. There are actually no mounting tabs for the engines, so the majority of the glue has to go on the thick parts of the engine units. I also masked off as many of the windows as I could, and I used liquid mask on some, and carefully cut masking tape on the others. Just be sure to attach the side windows securely, as I had several pop out when I tried to remove the liquid mask. Since the glass went inside, to remain forever there, I just filled in the openings with Micro Krystal Klear, and I can’t tell the difference between the clear plastic and the liquid. You really can’t see much through either type of window, however.

The airplane I did, Choice “D”, an HE-111H-6, 1H+GP, of the 6th Staffel of KG26, based at Grosseto, Italy, in the Summer of 1942, carried a typical Luftwaffe color scheme of 70/71/65 with white engines, rudder, and tail band. This was a standard Luftwaffe color scheme, and most modelers have these colors on hand. I didn’t do any weathering, as I assumed that the plane hadn’t been in that area for long. I started with the under surfaces RLM65 blue, followed by the lighter and later darker greens. I applied the white markings first, including the rudder, fuselage band, and engine cowlings and spinners.

The biggest problem I had was the tedious task of applying the decals. I think they included every maintenance mark and warning, and some of these were extremely small. It was just time consuming, but enjoyable.

All in all, it was a fun build, with adequate detail and no serious problems to require solving. I would certainly recommend it to modelers with average to above average skills, and I am looking forward to building Italeri’s HE-111Z when I get that new addition built on my house. Have a shot at one of these. Recommended.

Thanks to Italeri and Phil Peterson for the review kit. It kept me busy during part of the coroner virus shutdown.