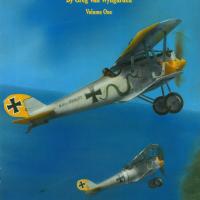 Greg Van Wyngarden has taken a new look at the Pfalz D.IIIa service in WWI. This is but the first volume of a two volume set. Datafile number 21 by Peter M. Grosz came out in1995 so it is about time that Windsock revisited the Pfalz D.IIIa! The initial Pfalz D.III aircraft received a poor reception amongst German pilots as it was regarded as inferior to the Albatros D.V. That doesn’t negate the fact that it was still superior to most of the Allied opposition of the time. The Pflaz firm, however, did listen to the pilot’s concerns over the D.III and soon offered improvements in the form of the D.IIIa.

The cover features a sensational painting, “Silver Eagles Over Flanders”. Bob Karr depicts of two German Navy MFJ “Yellow Beaks” Pfalz D.IIIA aircraft. The one in the foreground is 5918/17 with its prominent green snake decoration. Ronny Bar contributes eight large color side profiles, plus a color three-view of 4203/17 of Jasta 30, circa 1915. Ronny Barr’s art gets descriptions in the section ‘Key to Colour Plates’ that also includes the relevant photographs in this book that back up his artwork. Mick Davis grabs the pullout centerfold with two pages of new 1/48 general arrangement line drawings of the Pflaz D.IIIA including alternate center section struts, propellers, and exhausts. For those of you that still dabble in that odd 1/72 scale, Mick Davis also provides you the same drawings on a single page! I counted 81 black & white photographs.

Greg Van Wyngarden provides a history leading into the Pfalz D.IIIa and the forces that molded this fighter aircraft. The Pfalz D.IIIa was a design that was being constantly tweaked and many of those improvements are depicted in the photographs and well detailed captions. As one would expect, there really is not a clear cut starting and ending point between the Pfalz D.III and the D.IIIa as improvements were put into play as soon as possible. I really appreciate the way Van Wyngarden weaves in the pilot reports as they provide a special insight into the development. It’s interesting how the Pfalz design team understood their market and made every effort to keep communication lines open like Christmas gifts of food, money and drink that would be banned in today’s environment.