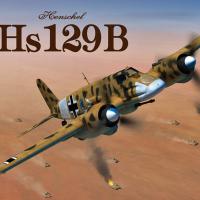 In Part 2 of my build of Zoukei-Mura’s latest Release, the 1/32nd scale Henschel Hs-129 B-2/RIII, we’ll get the wings and horizontal stabs on and get the kit ready for paint As a bit of background, the Hs-129 was a WWII version of the modern A-10 and was designed to and good at killing tanks. In Part 1, we built the engines cockpit and got the fuselage assembled. Let’s finish the rest of the assembly.

To start, the wing spars were cut from the sprues. If you want the interior parts to show, you will need a little sanding to get rid of the seam lines. These slot brilliantly into the previously shown slot and provide a nice fit. This should also provide the needed dihedral for the wings. The four fuel tanks are built and added along with MG151 magazines and lastly, the wing guns themselves were added. The Mg 17mm magazines are also added at this time. This does a great job of showing how this plane was a flying weapon- lots of guns, cannons and ammunition.

The next part is to get the outer skin onto the wings, add the landing gear and nacelles. The wings are comprised of seven primary parts- bottom middle, bottom outer sections (two parts), upper wing root (two parts) and top outer wings (two parts). To start, the bottom middle is added and, if all is aligned, literally snaps right into place. The outer panels on the bottom are next. Take care to align the seams between the inner and outer parts to eliminate the seam. Also, if you are adding the outer bomb racks, these holes are drilled before adding the bottom panels.

Before adding the top panels, the main landing gear is added- take are as the left and right have specific parts. These are so well designed and provide a solid base for the kit. They lock right into place. I did leave off the brake lines until later. Once dry, I added the firewall and let things dry thoroughly.

The upper wings are glued in place starting with the wing roots and working outward. Again, make sure the fit between inner and outer wings are tight and even to prevent seams later. The nose of the plane is finished by adding the two sides, bottom and nose and gluing firmly in place. The top of the nose is clear and the kit provides precut masks to cover all while painting and installing. Also added to the clear parts is the armored windscreen and heater vent. This is added and the parts are glued into place and held with tape until dry to prevent seams.

The nacelles start with the nacelle top which has clear instruments added to it. The Hs129 cockpit was so tight the engine instruments were on the inside face of each cowling and there are decals provided. A note here- make sure the clear parts are tight and fit and VERY well glued in place. I was light with the glue and the slipped out of place later and I had to remove the engines to fix them. Not much fun.

The engines are added and them the nacelle sides. I left off the landing gear doors and actuators until later. The radiators were glued in place next and the two cowling sides. These have a seam on top and bottom so take your time with alignment to eliminate sanding.

The horizontal stabilizers were added and a first round of filling and sanding was done. And going ahead of plan, I built and painted the Mk101 cannon and magazine that is mounted below and also built the its cover and mounted it to the bottom. It fit like a glove and can be held on by four bolts like the real item.

In the last part, I’ll get the kit painted and the remainder of the parts added and weathered.

My thanks to the excellent people working at Zoukei-Mura to making such wonderful kit.

Nacelle With Radiator Added
Previous Next