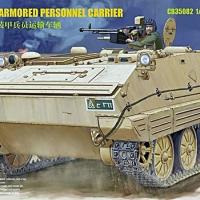 The YW-531C has a history dating back to the early sixties. The Chinese firm Norinco produced the first indigenous vehicle and rolled it off the assembly lines as the Type 63 in 1963. It was fraught with mechanical and technical issues that were quickly overcome. As with all base vehicles, many variants and ideas were applied to and tested on the design. In 1982 the Type 63C started rolling off the assembly lines and the export version was designated YW-531C. The vehicle has a German air cooled diesel power pack, weighs in at 12.8 tons, carries a 12.7mm machinegun for self defense and anti-aircraft and holds a 15 man crew (13 soldiers and 2 crew members). The Iraqi Army received at least 150 of these vehicles. They saw extensive use in the Gulf War. Photographic evidence is very limited and there are several in museums but I have not uncovered any interior shots as of yet.

Just when I had regulated myself to seeing more paper panzers and untold Sherman releases for 2011, Bronco steps up to the plate and releases three kits that saw use in the Middle East Wars with the promise of at least one more. The Archer, YW-750 (ambulance), and the YW-531C are already out. I think I am model building Nirvana. The kit is a real gem. It arrived on a Thursday (Tacoma Green Dragon’s build night) and I immediately dove in. The box is adorned with an artist rendering of an YW-531C somewhere in the desert. The vehicle takes up the whole box top with a very small T-72 in the background. The first thing you are greeted to is the instruction sheet. These are printed on a high quality gloss paper in booklet format. They include a very short history, sprue breakdown, assembly, and painting guide. The painting guide give you options for two sand colored vehicles. Both vehicles are in unidentified Iraqi Army units during the 1991 Gulf War. Also in the box are 32 tan colored sprues (16 of which are track), one clear sprue (periscopes and headlights), a small photo etched set, upper and lower hull, a very small decal sheet and a piece of rope.

First look opinions: The vehicle looks very basic and should be an easy build. The instructions state that glue is not required for assembly of the track. They use a pin and hole system to attach to each other (we’ll see). The PE grille work is gorgeous. There is no interior though the rear access door is detailed with one small ejector pin mark (maybe an interior set is forthcoming). The included rope is very unrealistic and will be replaced with 550 cord. The decals for the second vehicle are not supposed to be applied to the body. These are actually metal license plates and need to be attached to something then the body. Sheet styrene or left over pieces of the PE frame will work for that.

Assembly started by building the body and gluing several pieces together for later construction. Think ahead as you build. The driver’s two clear periscopes are required to be added at some point from the inside. As I usually just use black paint, this will not be a problem for me. Some filler is needed around the major body parts. The weld seams are small and delicate. I am almost certain I will need to repair both the rear plate area and the upper front hull join. I will be using stretched sprue for this. The plastic responds well to Testors liquid cement. That is to say, after application and pressure, you get a nice blob join line. That, to me, means a lot. So many plastics nowadays do not seem to take my glue of choice very well.

Well, the body weld seams look OK. The front is a little off but I fear that sanding will cause more damage than attempting to fix it more. The road wheel arms were added. Use care here. The liquid cement almost ate through one and I went back and reinforced it with superglue. In step 5 the instructions want you to add two PE plates to the right front corner. After looking at all available photos, I believe this is where the license plate mounts. As I am not doing that version or can find no proof that it belongs there, I left them off and sanded the molded on locator marks. The kit gives you two antenna base options. One that looks NATO and one that looks Russian. I opted for the Russian version. The commanders and drivers hatches seem small but are nicely detailed. They are able to be opened or closed and detailed on both sides. The engine access panels are the same way. The small and large PE air intakes seem oversized but that just may be me. No matter how attached, it overhangs on at least two sides. Centered, it overhangs on all sides. You may wish to make your own. The grill work is great on the parts though. On the small intake, the bent bolt flaps help with good alignment.

I assembled the 12.7mm machinegun. It is a little gem of a kit and other than the front sight post went together without a hitch. The ammunition box was another matter. The gab left after gluing the parts together left a very noticeable seam. This required the use of Mr. Dissolved Putty. Sticking with the OOTB theme, I made an antenna out of stretched sprue. I also made smaller stretch to be used for wiring on the lights. Use caution when removing the headlight framing. The attachment lugs are part of the sprue pour and I did not look at the instructions closely enough and removed the attachment points. I am sure this is going to leave an unnecessary gap.

The wheels and lower hull were given a coat of Desert Sand and the rubber was painted. These items were washed and cleaned up. I used Model Master Italian Dark Brown for the washing. I thought black might be just a little too dark. The attachment went well until the last arm. This snapped off and had to be re-glued. After drying and attaching the last wheel, I noticed that all the wheels had a terrible outward toe. I applied liquid cement to all the wheels and chocked them all in at right angles. Hopefully this will fix the toe. I think this is because the wheels are designed to roll. And the center rolling hub allows the wheels to toe out when the weight of the vehicle is applied. The Toe seems to be fixed.

You have to love Les Schwab! I went in to get my tires and brakes checked and while I was there, I was able to sit down (because not only do they have chairs, they also have tables) and remove all the track shoes off the sprues. I needed front brakes and the following weekend, I went back and was able to assemble both sides of track into 10 pad sections while I waited for the work to be done. I got the most boring part of the model building process accomplished while I waited. The tracks were assembled into their runs and received paint, wash, and dry brush. All through this process they held together with no glue. I applied the left side run and applied liquid cement. The next day I applied the right side and after the liquid cement was applied, the track started to disintegrate. It must have separated in eight different places. I took them all off and slowly reapplied the track in smaller runs. I used super glue to attempt the reattachment process. It doesn’t look too bad but I probably should have used super thin super glue in the beginning.

The build continued by adding all the little bits and pieces. The six piece fenders were added almost per the instructions. They have you add 14 pieces of PE that you need to bend to go behind the fenders. I saw no need for this as none of it is visible when it is complete. If you plan to remove some or damage them at the join, it might be necessary. Mine are holding with super glue and look great. The driver side lights were added and after they were dry, I attempted to put the wiring inside the hull. All three broke off and when they snapped, they took two of the lights with them. Ah….the joys of modeling never cease. After reattaching the wiring and the lights, I finally got them all hooked up. I am thinking that thin metal wire might have reacted better than the stretched sprue. The vehicle was given an overall paint spray of Radome tan. I attempted to mask off the painted track but did get some overspray. The tools and tarps were painted up and then the given was given a dark brown wash. I used the provided markings. The markings don’t give a unit but I believe they are for the Iraqi 3rd “Saladin” Division. The DsHk was assembled and the issues got worse. Not sure if I had a bad super glue time or what.

Every time I touched or moved part of it, the accessory pieces kept falling off and then, when I thought I got it all done, the two pieces of the cradle snapped in half. I added the tow cables next. While these look nice, I believe I made them too long. No measurements are giving in the instructions. I guessed and made them both the same and I guessed too much. I did a little external weathering and paint chipping and called it done! I would like to thank Bronco for doing some new Middle East War vehicles, Dragon USA for providing the review sample and IPMS for having the space for others to see this review. Hopefully Bronco will consider adding an interior to one for their kits or an aftermarket company will step up to bat. Have fun: build an Iraqi APC.