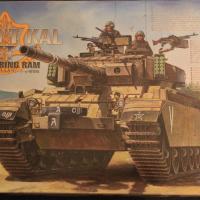 In the late 1950’s the Israeli Defense Force was faced with an ageing armory consisting mainly of up-gunned M50 Shermans from the end of World War II. To update and modernize this fleet of vehicles they purchased second hand Centurion Mark III and Vs. They were quickly upgraded to local specs and were named Sho’t (“scourge”). The Sho’t series of tanks served from the late 1950’s to the early 1990’s in Israel’s arsenal, through a number of upgrades culminating in the Sho’t Kal Dalet. The Sho’t Kal Dalet came into service sometime around 1985 with an upgraded laser range finder and thermal gun sleeve.

The instructions are classic AFV club. They are clearly printed on heavy gloss paper with clear callouts and in several places include nice depictions of a real vehicle to provide clarity on tricky parts placements. All of the parts are well molded in a heavy green plastic and there are a large number of vinyl parts included for tires, a mantlet cover and some other canvas covers. Going through the instructions you will notice that some of the design choices are a little old fashion. Specially, when assembling the suspension bogies in the first step the instructions call for you to melt pin heads with a heated piece of metal. Also the turret and gun barrel are provided in multiple parts rather the more common single piece barrel and two piece turret.

The first few steps of the assembly are for the running gear. The bogies are a pretty straight forward design that includes a very nice brass spring to be sandwiched between all of the parts in each bogie. I did have a bit of trouble with the fit of E17 to E19 and E18 to E17. There is a pretty heavy seam a crossed the top of all six bogies that required a fair amount of work to eliminate. However chances are that this will be hidden by the side skirts in most cases. The kit provides a nice set of separate rubber tires for all road wheels but you will still have to paint these as there is a molded inner rim on each tire. This can be difficult with the soft rubber tires, as they tend to deform and paint has a hard time adhering to them. Also, all of the kits road wheels, drive sprockets and idler wheels are attached using rubber washers and there are a couple of issues with them. First for the road wheels, the instructions call for you to use R1 to hold them on but this is too small to fit over the pins that the wheels need to slide on to. I ended up leaving them out and gluing the road wheels in place instead. For the drive sprockets and idler wheels, the washers used should be R3 not R2.

The assembly of the hull is extremely straight forward and for the most part went very smoothly. Just keep an eye open for the millions of tiny parts and tools that are all over the upper hull. Particularly in steps 12-14, there a number of small tools and fire extinguishers that are very easy to miss. I did not have any real fit issues when assembling the hull. There was a little trouble with the fenders but it was very easy to fix with a little Mr. Surfacer. In Steps 6 and 15, the instructions call for you to assemble the towing hooks using parts B14 and B13. Be careful as the fit of these tiny parts is awful and difficult to correct. The optional battering ram is assembled in Step 15 and is a really nice addition to the kit. With the exception of the wheel (Y1) included for this step the parts are really well molded and the fit is great. The wheel in my example had some weird molding issues on the tire and needed a lot of sanding before it was usable.

Finishing up with the hull assembly, the tracks are an older style of rubber tracks that do not respond to modeling glue. This means that you will need to use super glue or met the pins. The detail on the tracks is pretty good considering but they are a pain to glue and paint really does not want to stick to them. The side skirts are a pretty impressive molding. Mine were perfectly straight with no warping. In Step 19 the instructions have you install the tow cables, be careful when attaching them to the hull they can be a little fiddly. There are a lot of small parts, particularly the front pin (L44) and the multi-piece assembly on the rear hull. Also there is a reference image for installing the pin L44 but for some reason they included it three pages earlier in an unrelated step. Lastly for the hull assembly is the head lights and the vision blocks. They vision blocks are nicely molded from clear plastic but for some reason the head lights are molded completely solid. I replaced mine with clear drying window glue.

The turret is next and is probably the most time consuming part of this build. As mentioned above, the turret is provided in many pieces rather than the usual two pieces. In this case there is the bottom, two sides and top. Everything fits together with butt joints that have no location pins. This makes the overall assembly of the turret a little difficult. The fit of the two turret sides to each other is pretty bad especially to the rear and you also have to be very careful to get the top lined up. The whole assembly can be pretty fiddly and in my case I had to do a fair amount of sanding and filling on all the turret seams. This is a shame because the turret has a really nice cast texture that was nearly obliterated while trying to fix the seams. I was able to replace most of this cast texture by stippling Mr. Surfacer on to the turret with a stiff brush.

There are also a number of other unrelated fit issues with things that you attach to the turret. Part N8, the base of one of the antennas fits terribly into the slot left for it. None of my reference photos show any seams or dips around this part, but there is a hefty seam on the kit that required putty and sanding to eliminate. Also for the large boxes from steps 22 and 28, I found that I had to remove the location tabs to improve the fit and they still needed filling and sanding to hide any gaps between the boxes and turret. In steps 22 and 28 the locations of parts P44 – P47 are extremely vague. The instructions do provide a front view of the parts but they don’t fit flush to the turret and there is no side view for clarity. Also in step 28, when you assemble the rear box from I24, I22 and I20 there is no call out for part I52 but there is a location for it.

The last two things that I have on the turret are for the smoke grenade launcher and barrel assemblies. For the smoke grenade launchers, I had a fit issue with the left launcher and P28. I could not get the launcher to fit into it’s location without trimming back the edge of P28. Lastly the barrel and smoke launchers are finished with some molded parts made out of the same soft rubber that the tracks and tires are made out of. Unfortunately, all of these parts have heavy seams and attachment points that are nearly impossible to remove from the soft rubber. The final part of the assembly is all of the tools and the crew served weapons. All of these parts, including the tiny parts for the Uzis and Galils, are very well molded and add a ton of detail. Just pay attention to the locations of the tool brackets, the locations in the instructions can be pretty vague and I recommend referencing any photos that you have for clarification on locations for these parts.

The final part of the build is the painting and decaling. This kit provides information and decals for 4 vehicles. All vehicles are in the same overall IDF green scheme but there is no information provided on manufactures or paint number call outs to make painting easier. I used a custom mix that I sometimes use for IDF vehicles from the 1980s to 1990s using Tamiya paints consisting of: 5 parts of XF-65, 4 parts of XF-49 and 1 part XF-57. All of the decals performed well and left no noticeable carrier film or silvering issues.

Overall this is an impressive kit. It builds up quickly and for the most part fits really well. There are some errors in the instructions and a few fit issues with the turret that make the assembly interesting. But with planning and little experience, you will have an extremely nice and impressive example of this extremely interesting vehicle for your display case. Recommend for anyone with a little experience and an interest in Israeli armor. My thanks to AFV Club and IPMS for giving me the opportunity to review this kit.