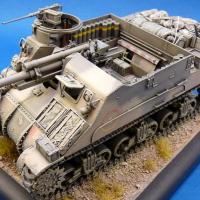 Dragon has countered Academy’s recent M7 release with their own excellent release of a mid-production Priest with a combination of the early suspension and additional armor. Coming in the usually sized Dragon box, this kit only clocks in with 260 parts as there are no individual track links or many left-over parts.

Those of you used to many of Dragon’s German subject that fatten the spares box will be disappointed with only about 10 left over parts! An entire sprue utilizes common parts from the previously released 105mm gun. The moldings are crisp and flash free with fine detail. The DS tracks are also well detailed and really pop when painted and weathered. I really won’t have much to say about assembly except that it was straightforward with excellent fit of the parts.

The only issues that I ran into were involving the gun mounts due to instructions that are poor. In step 6,do the following:

Since I was going to load up the back with stowage anyway, I did not add most of the tools and the cables on the rear deck. I was planning to model a New Zealand M7 based in Italy and based on photos the grouser boxes were often used for stowage so I modified the kit parts using foil and styrene as well as added two ammo boxes on the front fenders I also added some extra fuel stowage mounts at the rear of the engine deck based on photos using styrene stock. I used a plethora of stowage from my spares box with pieces from Ultracast, Plus Model, Resicast, Legend and others along with the addition of foil tarps, chain and rope. This is one of my favorite parts of the process so I really piled it on.

I did take a quick picture or two to help me remember where to put everything once I finished painting! I finished it off with my usual painting order starting with black primer and following up with successive tones and shades of the base color and the lighter ‘mud’ color. The decals from Bison (NZ Armor in Italy) went on and settled beautifully. After weathering I mounted the Priest on a base and then I was done.

Overall I was very pleased with how the kit turned out and it was a fun build. I recommend it without reservation. My thanks to Dragon USA for the review sample.

Yours is a nice

I'm building this now and appreciate the tips! I bought ET etched set and Verlinden resin. The ET is not up to the standards of Aber and the instructions poor!.......Verlinden is OK but I will add other items as you have.

Did you make the foil Tarps?........they are very convincing!