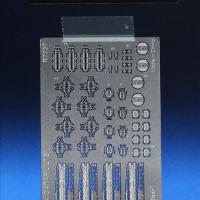 Bottom Line: Very accurate and finely detailed WW2 IJN catapults for cruisers and capital ships with cradles and trolleys. Four catapults per set. As good as or better than other photoetch IJN catapult sets, but has some assembly issues.

Catapults were added to all IJN cruisers, including heavy, light and training classes, before and during WW2. IJN catapult nomenclature was place of manufacture, type and model. Ten catapult types were used on IJN warships. They ranged in length from 17.0 – 44.0 meters long, but most were 19.4 meters long. The German engineer Ernst Heinkel designed the initial catapults for the IJN, and by 1930, the IJN was using compressed air catapults (named Kure Type No. 1 Model 1 or Kure Shiki 1 Gata 1 GO shashutsuki). A gunpowder-powered version was soon developed to replace compressed air versions, which had too many accidents, and was named Type 2 models. Type No. 2 catapults had 5 Models, but by the time WW2 started, Model 5 predominated on surface warships, but older light cruisers kept earlier Model 3s. Anything built after 1938 had Model 5 catapults. The two Furutaka class heavy cruisers did not use Model 5 since they were sunk before a chance for refit. Thus, most photoetch sets of IJN catapults depict (or are supposed to depict) Kure Type No. 2 Model 5 versions. During WW2, compressed air catapults were used for submarine catapults and the long, original 44.0 m Oyodo catapult.

Each steel metal fret has four IJN Model 2 Type 5 catapults with exceptional surface detail, with six pieces per catapult. Two kinds of cradles (four each) and eight trolleys complete the set. Enough to fully outfit four catapults with accompanying aircraft handling parts. A brief Instruction page is provided, although I found from experience that some of the steps should not be followed. Antiskid surface was on the catapult and its platforms and ring base.

As seen in Table 1, Lion Roar R7037 IJN Catapult set is intermediate in value compared to other PE sets. The detail is similar to the best, and extra parts are also similar to the best. Lion Roar PE sets are generally more available and easier to find than other brands. Overall, Lion Roar IJN Catapults photoetch set R7037 is as good as or better than other PE Model 5 catapult sets. One way to tell Models 3 & 5 apart is that Model 5 has antiskid surfaces and Model 3 does not (has “checkerboard” smooth pattern).

Note: This list shows only those sets with 1/700 Type No. 2 catapults only. Rainbow Models RB7070 has one Model 3 and two longer catapults, plus the 44m catapult unique to Oyodo early fit. These and other photoetch companies (Gold Medal Models, Tom’s Modelworks, White Ensign Models, etc.) make sets for IJN ships or ship classes that include catapults. These were not listed since they have other parts that obscure value calculations. Prices vary from MSRP, and thus, the value calculation may be different than in Table 1.

This set was one of four WWII IJN photoetch sets to review simultaneously, two of them specific to the Aoba half-class. This set was used to outfit a complete remake of Aoba, which survived until the late July 1945 massacre of IJN port-bound ships by US naval aircraft attacks. I had a very old Hasegawa #054 kit of the Aoba in its late-war fit purchased over 30 years ago. First of all, this older Hasegawa kit of Aoba is not accurate – it gets the general layout correct for a late-war fit (1944 and later), but there are many details that are wrong. It is imperative to get the right authoritative references. The best is the excellent Kagero Publishing book entitled: Heavy Cruiser Aoba (see References at end of this review for details). This book has minimal text (English!) and photographs, but is mostly super-detailed 3D drawings that are better than photographs or plans. I used this book as a guide, trusting the authors to have gotten the details correctly. I also confirmed the appearance as much as possible with other references, including a Japanese book I picked up on a business trip to Tokyo long ago – Mechanism of Japanese Heavy Cruisers.

The cradles and trolleys were easy to fold and handle and did not need glue (except for attaching the trolley base to the trolley). This set has a closed trolley base. The two types of cradles are for single-float (more surface detail) and twin-float (grid pattern) aircraft. Assembling the catapult was not as easy. Fold lines are insufficient to easily fold the catapult sides, resulting in some care, massaging and CA glue with accelerator needed to keep the folded catapult square and not trapezoidal or bulged. The Instructions show that the internal cylinder (part #3, which folds easily and handles well) should be glued to the catapult before folding. Bad idea – it gets in the way of trying to fold the thick metal catapult sides. This issue is rectified by simply inserting the cylinder assembly into a folded catapult before sealing the rear.

Parts #5 (single pulley) and #6 (rear platforms) are extremely small pieces. The single pulley is easy to fold, but the platforms were virtually impossible to fold, and after painting, the antiskid surface detail was lost. After sending one platform into oblivion while trying to fold it, I decided to simply glue the platforms to their specific locations. The single pulley was intended to fit into a slot at the front plate of the catapult. Not going to fit. Simply glue it to the front face plate. You have to supply a plastic or brass rod if needed to secure the catapult to the base, which will let it rotate.

I test fit a catapult to IJN ships in my collection already built, and it appears to be a good fit for light cruisers, heavy cruisers, and battleships, but were too long for the old mold Chitose class seaplane tender (even though this class used Model 5).

My test bed was a complete remake of the old Hasegawa Aoba heavy cruiser kit (#054). Four PE sets were up for review at the same time, with two specifically for Aoba, so four kit birds were killed with one review stone. Due to life situations, the complete remake took longer than hoped for, but the catapult finally made it on the refurbished Aoba in 1944-1945 fit, as pictured. The old Hasegawa Kinugasa kit (#064) was hastily thrown together with Elmer’s Glue as a comparison. The two kits were identical, although neither was historically correct. The aircraft section was identical between kits, so hasty Kinugasa makes for a good comparison of how Lion Roar R7037 catapults look. Other ships in my collection benefited from the upgrade, also pictured.

Lion Roar R7037 catapults, trolleys and cradles look much better than solid plastic kit pieces, and bring a new level of accuracy and detail to any kit catapult replaced. The trolleys and cradles are especially good at being accurate and good-looking, compared to none or blocky stubs on catapults from kits.

The R7037 Lion Roar Type 2 Model 5 catapults look much better than original plastic kit pieces – no contest. They add close-to-scale authenticity, and look so good that the rest of the model needs to be similarly improved, or else the catapult improvement will be wasted. Features, value and quality are equivalent or similar to the best IJN catapult photoetch sets on the market today. Recommended for moderate to advanced modelmakers because of the difficulty in folding the catapult itself and the small size of pieces.