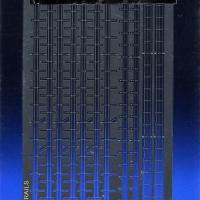 Lion Roar has been providing ship modelers with extensive sets of ship-specific photo etch for some time, and now offers generic railings for nearly any WWII era Japanese vessel. The package contains two identical sets of stainless steel rails, each containing three different types of rails. One type is the “drooping chain” type that is usually found on the main deck (as well as the second deck on battleships), and two types of “solid” rails usually found on the upper decks or superstructure. The solid rails are of a three-dimensional nature, requiring that the extra long stanchions be folded over themselves to provide supplemental, angled supports to each stanchion. This is a new twist that I’ve never seen this before on PE deck railings.

This set is almost identical to the “USN” set reviewed earlier by Dick Montgomery, but without the additional entry gates provided in that set. One important omission in this set (or many other IJN railing sets, for that matter) is the gently sloping bow railings found on nearly all Japanese destroyers and cruisers. The modeler will have to try and bend these railings himself to match the sloping bow of whichever ship these railings are used on.

While the photo etch metal is similar in thickness to what is found in Hasegawa or Tamiya kits, the parts themselves are quite delicate in their representations of the stanchions and railings, more truly proportional than just about any other brand that I’ve seen. This is evident in the comparison photo. It should also be noted that with the different types of railings provided in the set, the ones for ships’ decks have a bottom rail for attaching to the model, while the ones for the upper works have tiny “feet” at the end of the stanchions for attaching to the side of the superstructure.

All in all, this is a very nice PE set that will go a long way to dressing up just about any Japanese vessel that it’s used on. My thanks to Dragon Models for providing this set for review and to IPMS for allowing me to review it.

Comparison to other rails
Previous Next