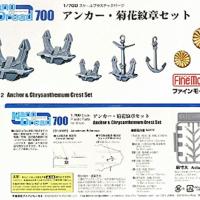 Set WA12 is only for Imperial Japanese Navy (IJN) warships, and has anchors (bow and stern) for the major warship classes (destroyers, cruisers, battleships/carriers). Two sizes of chrysanthemum crests for cruisers and battleships/carriers are also included. Unlike photoetch and some injection-molded plastic and resin anchors, Fine Molds anchors are three-dimensional, like the real thing. No assembly is required – each anchor and crest is ready to remove from the sprue, clean up and attach to your model. The look is very close to scale and accurate as near as I can tell from many reference photographs of IJN warships. Although not every single anchor used by the IJN is included, those you get are by far the majority of those actually used.

Each set has four identical sprues. Each sprue has six anchors and two crests. One crest is for cruisers, one for battleships/carriers. That means four cruisers and four battleships or carriers can be crested per set. Two bow anchors for destroyers, and one bow anchor each for cruisers and destroyers per sprue mean that four destroyers, two cruisers, and two battleships or carriers can be re-anchored per set . Instructions are on the back of the box, but this set needs no instructions. Depending on the individual model, you may need to sand off a molded-on anchor, remove an anchor that you previously glued, or simply use the Fine Molds anchor in place of a new kit anchor. Each of these scenarios is illustrated in the figures. Basic modeling skills are all that is necessary.

One WA12 set (approx. US$15) can finish four destroyers, two cruisers, and two battleships or carriers. Considering each anchor or crest costs about $0.75-1.00 each, it will cost about $1.50-3.00 to outfit a single warship with Nano Dread anchors/crests. Normally, 1/700 IJN warship kits do not contain crests, and some models have no or molded-on anchors, making this set very useful. The accuracy, convenience and appearance are worth the extra cost to outfit so many warships from a single set, representing a good value.

Compared to other aftermarket plastic anchors, the Fine Molds WA12 anchors showed more detail and were finer (not as chunky), or smaller, which is closer to true 1/700 scale appearance.

Anchors are attached to the sprue at their stock end, making clean up easier. Anchors should be painted the same color as the bow hull section – which is a dark grey. Crests should be painted brass. Be sure to check references or photographs of each ship class to get the correct angle of mounted anchor. For IJN warships, the flukes (pointy ends) pointed towards the rear of the ship, at about a 45 degree angle from the waterline.

Anchors and crests were easy to remove from the sprue, handle and apply to models. I used the destroyer anchors (parts 3) on a Matsu-class destroyer refurbished over ten years ago, and the old Tamiya Shikinami model still in need of upgrading. These ships had no anchors supplied with the kit, and Fine Molds anchors are just right for these small ships. The Shikinami received the stern anchor for destroyers after removing the original molded-on anchor with a Dremel tool carbide sanding tip and smoothing the area with sanding sticks . The anchor and deck were repainted with Floquil SP Dark Lark Gray . This paint is darker than the Floating Drydock IJN Grey I used years ago, but is close enough . Next, I decided to replace the molded-on anchors from my Nachi cruiser with part 4 . I used a Dremel tool with a small carbide sanding tip to carefully remove most of the kit anchor . Then I used a variety of sanding sticks and sanding paper to smooth the anchor area, and drilled a hawse hole with a large drill bit in a pin vise by hand . The stern and bow areas were painted with Floquil SP Dark Lark Gray, which again was darker than the original color . I used Brogden Enterprises Weathering kit powders to brush on rust, blending in the new paint. I also removed the aftermarket stern anchor (which was too large) and after sanding and painting the area, simply glued on the Fine Molds stern anchor. For the large anchors, I chose an old kitbashed model of a hypothetical Fuso AA battleship from the old Aoshima kit. It already had aftermarket anchors, but did not have a stern anchor. The old anchors were removed and the new anchors added – very simple and important since I did not have the paint to match anymore.

The crests were applied to the Fuso AA battleship and Nachi cruiser models, and were an improvement over the older, thicker crests.

All anchors look just fine on each class of warship, and the stern anchors are more to-scale than previous aftermarket or kit anchors.

So far, this set is the only one with the stern anchor found on Fubuki-class destroyers. Usually they are molded on if present at all in Fubuki class kits. The crests are better than other aftermarket crests, although the thicker ones can be thinned down by sanding, as can Fine Molds crests if necessary.

Once again, I thank Fine Molds, Dragon Models USA and IPMS/USA for this set for review.

Figure 2: Back of WA12 box with instructions, although they are not really needed

Figure 3: Sprue for WA12 showing anchors and crests already painted on the sprue

Figure 5: Before picture of Matsu-class destroyer bow showing no anchor

Figure 7: Before picture of Shikinami destroyer bow showing no anchor

Figure 9: Before picture of molded-on stern anchor on Shikinami

Figure 11: After picture of Fine Molds stern anchor on Shikinami

Figure 12: Before picture of Nachi cruiser bow with molded-on anchor

Figure 14: After picture of Nachi bow with Fine Molds anchor and Chrysanthemum crest

Figure 17: Before picture of Fuso bow with aftermarket anchor and crest

Figure 18: After picture of Fuso bow with Fine Molds anchor and crest

Figure 20: After picture of Fuso with Fine Molds stern anchor

Figures 17 thru 18
Previous Next