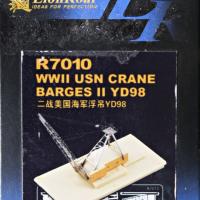 LionRoar has produced a line of WW2 US Navy barges, either mixed resin + photoetch or all metal photoetch. This small box kit is the US Navy Crane Barge YD98, in service during WW2 and into the 1960s at Mare Island, California. Kit has 17 parts (2 resin, 15 steel PE), and a simple instruction sheet (front & back) for PE folding and assembly.  1/700 crane barges are an unusual subject that would be a necessity for dockyard dioramas. Like the other LionRoar barges, these are basic and simply detailed, in the case of YD98 too simple. Would have liked better instructions, more parts and/or decals for the barge YD number, but a quirky, fun build. A few reference photographs available show this kit is close to the actual WW2 appearance, but lack all the usual deck gear crane barges need. Folding of the PE crane was straightforward, but the housing did not match the actual. Only a problem for purists, and will build into an odd finished model OOB. For the more advanced modeler.

Cranes are ubiquitous at harbor dockyards. Some are permanently mounted on a flat barge and towed to wherever they are needed. Unlike warships and auxiliary ships, information on barges is rare and suspect. In 1941, the US Navy received YD78, built by Washington Iron Works. Photographs of YD98 are usually in the background from other ship photos, but there is one side view from 1956 or 1968, depending on which website you find it. These few photos were extremely helpful for assessing the accuracy and add-ons for this kit, which I decided to do, having built LionRoar R7009 YD72 OOB and not liking the lack of details.

LionRoar, a prolific Chinese producer of 1/700 photoetch sets for naval topics, launched a series of 1/700 cranes, crane barges and barges in 2011 to little fanfare, but a relief for dockyard diorama builders. YD (aka Yard Dog, actually Floating Derrick) 98 was one of the first released. The resin/PE set comes in a nominal 4x2x1 inch (97x64x30 mm) box with pegboard on top and the usual LionRoar black-to-blue fade from top to bottom, and a photo of the finished model and a picture of the fret. Inside you have a small page of Instructions, front and back. Two small bags contain the two resin parts: 1) barge with crane mount base; and 2) crane house. The PE fret is stainless steel (just like the real crane) with 15 steel PE pieces (numbered 1-15).

The PE fret has sticky clear plastic on both sides, which means the fret needs to be cleaned with soap and water after removal of the protective film. The PE parts are fine and detailed, and on the sturdy side of metal heft. Some pieces have embossed detailing. The Instructions are very basic, and use exploded views with curved arrows to indicate how to fold the crane, and straight arrows to show where the doors and panels go on the resin crane house. There is no text and no explanations. The instructions need explanation of the order of assembly and that the crane only has one way it can be assembled (unless you practice microsurgery on the cables). YD98 can only be built with one orientation of the crane. But there were other issues too.

This build was stretched out over 19 months due to my schedule and because I decided to accurize the kit based on photographic evidence. After reviewing YD72 OOB and not liking its simplicity, and seeing that some structural features of YD98 were incorrect in the kit, I attempted to right the wrongs, since building YD98 OOB would be building a slightly defective appearance. The major changes were:

It was apparent that determining the colors of the barge, deck, crane house and crane were not going to be authoritative, but by piecing together hints from various sources, I concluded that the house and most of the crane and crane support girders was 5-H Haze Gray (Model Master 4238 5-H). The barge sides were very dark gray or faded black and was painted a dark gray (Tamiya XF-63 German Gray). The deck was intermediate in shade between the light gray barge house Haze Gray and the dark gray barge. I decided from pictures that the barge deck was probably wood, as the shade did not seem to match any of the usual gray shades used in WW2, especially compared to the ships nearby, so I chose Model Master 4235 Mahogany Flight Deck. The crane arm obviously darker than the Haze Gray areas, but slightly less dark than the barge sides, so 5-D Dark Gray (Model Master 4237) was used for the crane arm and the base for the house on the barge. The cables attached to the crane were painted black and rollers/pulleys were painted 5-H. Part 7 was black for the single arm section, and 5-H for the two-armed section.

The PE pieces were very easy to remove from the fret without distorting the pieces – this is a big plus. Airbrushing or hand painting of the parts was also trouble-free. I kept the PE parts on the fret to be painted, and then removed, and the parts touched up later. Remember the crane is 5-D, not 5-H, meaning masking the fret carefully for painting.

Order of assembly is important

After assembly, the crane house, deck and barge sides were weathered with Weather System Rust & Weather Kit, using the black powder mostly, and white & light gray pencils to streak the barge sides and deck. The deck was washed with light grey to simulate weathered mahogany. The entire model was sprayed with Testors Dullcote (outdoors), making sure the crane was matte and not shiny.

At $22 MSRP, this PE set is the same cost as a destroyer-sized ship but is considerably shorter and with fewer pieces. By itself, this kit is basic but can represent YD98 well enough to be presentable when viewed at a distance. The kit is enhanced by additional details and corrections and would benefit from 1/700 personnel and ropes laying around.

This PE set is recommended for advanced 1/700 scale modelers because of some very small and easily distortable pieces, tight tolerances, needing scratchbuilding skills and a well-stocked spare parts stash. YD98 can be built in a short time OOB, but will look too sterile, will be difficult to build as directed, and not as accurate as it could be. It is an unusual subject and looks just fine next to warships. With a little thought and extra accoutrements this can be turned into an attractive addition to any fleet.

Recommended for medium to advanced modelers of 1/700 scale ships with experience in handling, folding, and gluing small, metal PE parts. Very highly recommended for dioramas and has the room to superdetail easily. An odd but rewarding project that will test your 1/700 modeling skills.

Modifications to underside of crane house