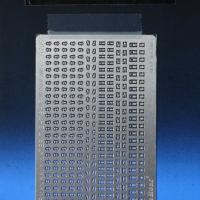 Lion Roar expands its 1/700 warship photoetch set lineup with German Navy (DKM) windows. These are not portholes, but are windows used on above-the-hull superstructures. A small instruction sheet only has pictures of each porthole showing proper orientation. There are no guides as to which windows go where on what ship – you are on your own to determine how to use them.

For a retail price of $11, you get a medium-sized fret of stainless steel with 336 separate windows. The fret is covered on both sides with a plastic peel-away film. For each window, its cover is attached in the open position. If you dare, you could cut off the cover and apply it to the window. There are seven different types of windows. One type has a left and right side orientation. There are windows for doors (hatches in proper naval parlance) and superstructures. Even the rain trough above the window is included (which is a sure tip to which side is up). Covers open to the left, right and down, so every possibility is found in this set. There are enough windows for 1-2 large warships and at least four smaller ones. A decent value.

The fret was washed (after removal of the protective plastic) in soapy water, and airbrushed with Lifecolor Acrylic Hobby Colors Hellgrau 50 Var. (DKM Light Grey). In theory, the best time to add the photoetch (PE) windows from Lion Roar would be during building, but I did not have that luxury. A previously built (see IPMS/USA review of Tamiya Z37-39 from 2008 in the Ship Reviews Archives by yours truly) H-P Models Narvik class German destroyer (Z30) G009 was chosen for upgrading. This resin kit had little fine detail on the superstructure and would benefit from the upgrade. Z30 had enough room around the windows to mount the PE windows, and had nothing around the windows that needed to be removed. The windows were previously drilled out and blackened with India ink. This model already had PE weapons, doors (hatches), railings, radars, ladders and other fittings added previously so it was cluttered.

There were windows on the ship to use each type included in the PE set. These are very small pieces, but with a fresh razor blade, they were easy to remove from the fret. Even fine tweezers made for frustrating pickup and placement attempts. The best way to handle the tiny windows is to use a sharp point – a pin, needle, dental pick, anything with a fine point. This simple tool also makes it easier to mount windows under superstructure overhangs, and align the window properly before the glue sets, which is fast. To attach the windows, I applied a very small amount of thin CA glue just under the window where the cover would be, using a large needle. As long as you make sure the windows are flat before mounting, they go on easy.

I touched up the model with Hellgrau 50 Var. I spent one night prepping and painting the fret, and one night adding the windows. It looked much better than before!