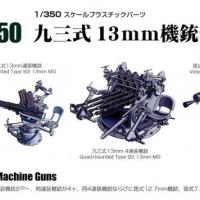 The instruction sheet gives painting information with Mr. Color paint color numbers, and the box top illustration can also be used as a color guide and super detail guide (for the criminally insane AMS types among us). The instruction sheet also includes a partial placement guide for several ship types, including a 1940 Myoko class CA, a 1932 “Special Type” (Akatsuki) DD and a 1943 Akizuki DD.

While the cost may prohibit fitting out an entire larger class vessel with these sets, these weapons will go a long way towards enhancing the level of detail on any IJN warship. Can a set of 25mm Type 96 weapons be far behind? I hope not.

Thanks to Fine Molds and Dragon USA for supplying the review sample.