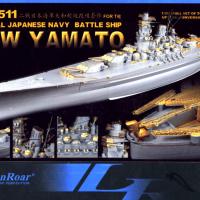 Anyone who’s seen or even heard about the new Tamiya Yamato knows that this is one of the largest, most complex model kits yet to hit the hobby store shelves. So it almost goes without saying that this new super detail set from Lion Roar would be equally large and complex. Using the bulk of this set, or even a portion of it, is not for the faint of heart.

This multi media set contains 27 photo etch sheets (both brass and stainless steel), several bags of resin parts, and a complete set of turned brass gun barrels for the main 18”, secondary 6”, and dual purpose 5” guns. There are resin replacement parts for four ship’s boats (2 motor launches and two barges), six complete 5” open gun mounts, and ammunition boxes, as well as blast covers for each of the 18” and 6” guns. The PE covers just about everything imaginable – and this is truly only a partial list: the full degaussing cable, railings and ladders (with hand rails and without, including accommodation ladders), anti-aircraft gun mounts, shields, barrels and platforms, funnel cap, complete catapult and crane systems, aircraft parts and trolleys, turret details, superstructure and bridge details (including fore and aft radar antenna), even brass sheets to cover the aft deck/aircraft handling area. Each of the roughly 3” x 5” sheets is individually wrapped in plastic film to protect the delicately thin parts and prevent tarnishing.

Although similar, this set should not be confused with earlier, though not so old, Lion Roar super sets for the old Tamiya Yamato (such as sets #3501 and 3503). This new set has been designed for the new Tamiya kit, although many of the parts and PE frets are identical. This set does not include replacement resin 25mm AA gun turrets, nor the props and shafts, or the anchor chains.

Considering the already very high quality of the new Tamiya Yamato, this is about as complete an upgrade as anyone could ever want. The modeler will undoubtedly dull many a cutting blade and empty bottle after bottle of CA glue by the time he’s gone through all this PE, resin, and brass in this complete set. I also have no doubt that he’ll have an extraordinary model of Japan’s greatest battleship when he’s done.

My thanks to Dragon Models for providing IPMS with this set for review.