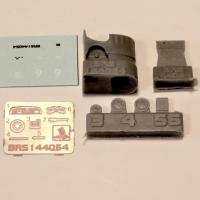 The Clarkat Type B was a flight deck tractor used by the Royal Navy on its carrier fleet from 1942 until the mid-1950s. They were first seen on HMS Illustrious following her repair and refit in the USA in 1941-2 and served right through the Korean War. It was developed from an existing commercial tractor and was also used by the USAAF in the UK, so the possible uses for this kit go beyond an RN flight deck diorama.

With both kits, the resin is cleanly cast, though the 1/72 kit has a couple of awkwardly placed casting blocks that demand some care to remove. This kit has ten resin parts with separate wheels and hood; the body is cast in one piece. The 1/44 kit has seven resin parts, though on mine the small cockpit fire extinguisher was missing from the casting block.

Assembly, as you might expect, was quick, though the tiny parts on the 1/144 model were quite fiddly to place. This tiny Clarkat received the kit’s recommended all-blue scheme for HMS Victorious. I deviated from the instructions for the 1/72 model, as I found a nice photo online that showed one of these on a British light fleet carrier in the early 1950s. This appears to show the Clarkat with a light coloured body but a darker coloured hood. This could be interpreted in a couple of ways – either overall Yellow with a Royal Blue hood, or overall Sky with Dark Sea Grey hood. I chose the former as it was probably more likely and was in any event a lot more colourful!

With the decals, one should be aware that they are printed with a continuous carrier film, so each decal needs to be cut away from the sheet individually – very fiddly with the tiny 1/144 decals! This isn’t mentioned on the instruction sheet, so beware – guess how I found out…

Otherwise, these are neat little kits of an oft-forgotten part of flight deck operations. As long as you’ve dealt with resin parts in the past, you should have no difficulties with these smashing little kits!

Brengun products are available through their website or through their foreign distributors worldwide. Our thanks to Brengun for the review samples.