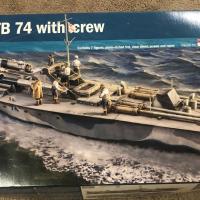 Italeri’s 1/35 scale version of the Vosper MTB 74 which was used on the 28 March 1942 Operation Chariot Saint Nazaire raid comes in a big box. It was a specially configured boat having most of its offensive armament removed and having two torpedo tubes added to the foredeck. It also had special muffler silencers added. It successfully hit the nets which protected the docks, torpedoed the lock gates and achieved its mission, but was sunk on its way back home. Chariot achieved its goal of disabling the only dry dock in German-occupied France which could handle the Tirpitz so that forced her to return to Germany for any repairs.

The kit is molded in gray plastic and includes a fret of photoetched details, a decal sheet, a clear sheet, screw, ropes, and seven crew figures. The hull is in two pieces with just the aft transom area being separate.

For this first installment I’ll concentrate on the cabin and its interior. There is no interior in the hull---there are two positions from which to control the boat, one inside the cabin and one outside the cabin. I followed the directions in their order and steps, painted everything and then added the photoetch and decals. By mistake I put brass part C in place before the decal underneath it, so had to cut the decal into individual pieces to fit into the recesses of the metal part.

Everything fit well except the windows. The clear windows are some kind of acetate requiring photoetched details glued to the inside and outside of the “panes”, which made me a bit nervous. Their fit wasn’t the best, and in fact I wish they were a little bigger---some barely covered the openings they were to fit into. I painted the photoetch first and a friend of mine told me to try to adhere them to the “glass” with Future Floor Wax which I did after trying to put one on with thin CA. I got a smudge of that on one window and tried to get it off with debonder, which only made things worse. I thought Future might cover that up, but it didn’t.

So for the rest of the windows I just glued the PE on with the Future which turned out well. There are a lot of small pieces in this kit, but so far it’s been an enjoyable build.