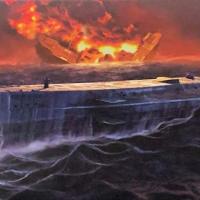 When I heard a 1/72 scale World War I submarine kit was coming out, I was excited. It ended up being the U-9 class from Germany. The kit is molded in light gray plastic and comes packed in a nice large, sturdy box. In fact, it will fit back in the box all the way until the completion of the build.

When I first saw the instructions I thought they were ruined, but they are intentionally given a distressed look with yellowed pages, coffee mug rings and scotch tape making them look as if they’re really old. The hull comes in two halves plus a deck and reminds me a lot of the structure of the Titanic with its large plates and rivets. The kit’s parts are very finely molded with virtually no flash. There are many options such as open and closed torpedo tubes, retracted or upright paired smokestacks, open or closed hatches, and covered or uncovered conning tower. If no glue is used, the smokestacks will fold down flush with the deck or extend into the vertical, and the conning tower can be changed at will, covered or uncovered

Included with the kit is a 99-page book with both English and German text, covering early U-boat development and featuring many nice pictures. I thought it was interesting that Alfred Von Tirpitz originally was against wasting money on U-boats.

I followed the instructions for building the hull, gluing in the spacers to only one half so that I could adjust the other half. I weighted mine since I make all my boats and subs float. I then used tube glue, put a dab on each one of the spacers, and taped and rubber-banded the whole deck to the hull to get a perfect fit. There is no keel on the bottom so it has a smooth hull like a boat.

Parts C12 to C15, C19, C20, C31 and C32 are tricky; they comprise the prop shafts and their housings. After finishing my model and putting the two props on, they would probably hit each other in real life so I may not have gotten the angles right. Parts C9 and C10 were also tricky for me so caution should be taken with that two-part stanchion.

I glued in all my side hole stanchions and posts, which was a mistake when it came to painting the model. To do it again, I would leave off parts C37 and C38 (they’re poles, 2 forward and 2 aft, and C29 and 30 (stanchions), plus B30, B32, B33, and B34, the diving planes. There are three vertical locators for the diving planes and the instructions show to install them into the top two. I inquired of the company why there is a third empty hole and was told and shown a picture where the diving planes were in the upper and the very lower holes in drydock. Looking at other pictures, there were usually two diving planes on each side which reminded me of World War I biplanes, but they were in different positions in different photos.

There are two nines on the decal sheet, different style numerals with no explanation as to which ones to use, so I just used the ones I liked. I went with boat U-9 even though the modeler also has the options of 10, 11 and 12, because I only saw the builder’s plate which glues to each side of the stern for U-9 but the others are also included on a different section of sprue. U-12 is the boat they actually found sunk, and from which measurements were taken to create the model.

The Cartograph decals were excellent and lay down nicely with Solvaset. No thread is provided so I used E-Z Line for the rigging.

I thoroughly enjoyed this build and it went fairly quickly as I had less than 30 hours into it. It would’ve gone a lot quicker if I had left the aforementioned parts off which would really have streamlined masking. I hope they build more 1/72 scale subs and maybe even some small ships.

I thank MBK-USA, Das Werk and IPMS/USA for the opportunity to build and review this unique and enjoyable kit.

In Action 2
Previous Next