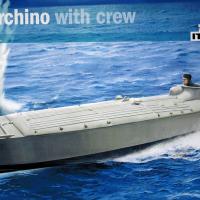 The Motoscafo Da Turismo, also known as "Barchino" was an explosive carrying motor boat used by the Decima MAs (10th. Light Flotilla)  as a special assault craft during World War II. This craft served in both in the Mediterranean and Black Sea.  Approximately 20 crafts of this type were built during the war. The boats were designed as a "one-way" mission against enemy vessels. The Barchino would explode once it impacted the side of the enemy vessel, as the warhead was strapped to its hull and thus denoted. The operator, in theory, would jump the vessel prior to hitting the enemy vessel.  Because in some cases the mission being extremely risky, it was implied that the pilot would not return. The vessel would carry 330 kg. (728 lbs.) Warhead and the warhead would be detonated by a water pressure fuse. This type of attack was used successfully against the HMS York at Suda Bay, Crete. The ship was sunk.

The kit comes with two spruces, one photo etched set and decals. This is a small kit as it contains 37 parts for the boat and an additional 8 parts for the crew. The fret contains 40 small parts, 30 of which are the cleats. One of the spruces is dedicated entirely to the boat, while the second spruce contains the crew. The decal sheet contains a minimum of decals; one for each side of the name plate, the number for the vessel captured in Southern France and for, what I presume is the petrol tank for the ship. The photo etched fret contains the front of the control panel as well as the prop and what, I believe, are the wing nuts for the doors to access the interior of the real boat. The directions consist of 5 page instructions with 13 steps. The rear of the instruction has black and white profile/top view of 2 crafts. The colors are given for Italeri colors, as well as FS colors. The front of the instructions has a small history of the craft in English, French, Italian, Spanish, German and Russian.

You start by gluing the two halves of the hull. I recommend that part 12a and part 5a be added at this time to keep the hull straight and thus avoid problems once you have to add the top deck of the boat. Next I glued all the parts that had two pieces. They include the charge, the prop connector to the engine, the petrol tank and the cockpit protector. After the hull dry for 24 hours I painted the inside and put it aside to dry. After I glued the charge and the supports for it, I glued them to the inside of the boat.  I found two pieces to glue inside the hull and toward the rear of the boat and just ahead of the cockpit assembly. I wondered about these two pieces and did not realize what they were until I found several on the boat. These two pieces are part of the engine of the boat of which there is none with the kit. At this time I painted the inside of the boat to resemble wood, as well as the charge to look like steel. I advise that you are very, very careful with piece number 24a. In my case the "carpet monster" ate the bloody thing. The rear and front deck added to the hull and thy match the edges of the hull very well.  The problem was part 34a which the section of the hull that goes above the charge. Matching the front and rear deck were a problem and the hull edges did not match on my kit. A small amount of surgery was performed in order to make them match. The rest of the kit goes well and not other mayor problems were encountered. The kit has both a minimum of painting and decals. The only problem I encountered with the kit was that I was not able to glue the wing nuts to the access doors of the ship. They are very small and very difficult to handle and I lost 3 of them to the "carpet monster", at which time I decided to stop.

This is a simple kit that can be finished in a fairly fast amount of time. In many ways it reminds me of the early kits I built in my younger years, which was a couple of weeks ago. I, also found that this kit is a re=release of one made by Italeri several years ago. I have two concerns: 1) The wing nuts for the doors are too small to handle properly and I feel it would have been better if they were molded in the plastic, and 2) it appears that there were plans to also show the engine of the ship.

I would like to thank MRC and Italeri for the opportunity of reviewing the kit.