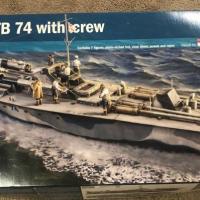 In Part One, I alluded to some issues I had with the windows in the kit so I’ll start with that.  The portholes had acetate to represent the glass, which turned out to be larger than the flat spots they were intended to nestle into, so most had to be trimmed down.  The same needed to be done for the ones that were in the deck.

Although the deck is meant to be screwed down, I elected to glue it as well, and discovered a section on each side of the deck that had flash which I hadn’t caught, and I paid for that by having to remove a glued-up deck just for that purpose, but in the end it turned out OK.  Word to the wise: make sure that’s cleaned up before putting the deck on.

Most holes for items which attach to the deck needed to be opened up by the builder.  I didn’t particularly like having to drill my own and inadvertently missed a bunch, but with careful measuring---and a bright light---I could see thin spots where to locate and drill the holes.  The photoetch was thicker than most kits’ I’ve dealt with previously, but this is a larger scale so it makes sense.  Those items worked well.

Many parts needed to be sanded and trued where their 2 halves joined together, and there seemed to be a lot of “round things” on this boat that needed sanding.  The forward torpedo tubes on the bow required clamping, and then the torpedo tubes didn’t sit squarely on the deck so I needed to clamp them there too.  Also, the torpedoes wouldn’t fit into them, so I had to carefully go inside the tubes with the file and sandpaper and sand from the inside so I could insert the torpedoes into them.

I like the kit’s camouflaging, which made it look unique.  I sprayed Future where the decals were to be located, but when I tried to flat coat them with a matte acrylic spray, they got a milky white look.  To rectify this, I lightly sanded over them to touch them up, re-glossed them, and then re-flattened them with lacquer-based flattener this time (Dullcoat).    Attaching the rigging to the yardarms on the mast, both sides ended up breaking.  For purposes of getting the review completed, I decided to repair them, so cut sticks to hold them up in their glued position.  It worked OK, but later I’ll probably remove those and put a metal beam across the mast.

The kit comes with seven very-nicely molded figures.  I have never done a figure, so I’m sure I did not do them justice, but they look neat on the boat. This build took a little longer and a little more effort than I anticipated, but I liked it enough to get Italeri’s Elko 80 foot torpedo boat to build as a companion piece.

Like all my ships and submarines, I weight them, and they all get test floated.  This is just a childhood habit that I’ve done since I first started building models in the first grade.

I used mostly Tamiya paints with a few Gunze Sanygo colors which I had on hand.  I would think anybody that has done a model or two should be able to handle this one.  Most of the problems I had, I believe, were self-induced.

Many thanks to Italeri, MRC Academy and IPMS for the opportunity to review this kit.

Side Water
Previous Next