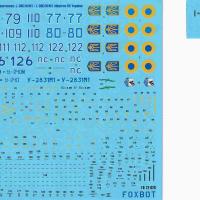 For those that have never heard of FOXBOT, they are a decal and mask manufacturer from the Ukraine and have a series of decals and masks in scales from 1/32 down to 1/144. They specialize in planes from their region such as MiG and Sukhoi but they do have markings for other planes such as B-25 and P-38’s and more. Needless to say, this company could use some support at this time. The set includes markings for nine L-39C/M/M1 aircraft of the Ukrainian Air Force:

Inside the package you get a four page full color sheet with both side profiles of all nine planes. Color schemes vary from green to gray and one with the gray digital camouflage. Markings and stencils are included and are well printed and in register. They are printed by Decograph in the Ukraine. Markings are also included for wing pylons and fuel tanks. Looking closely at the decal sheet, there are markings for at least two planes and maybe more.

Highly recommended. My thanks and prayers go to FOXBOT and to thanks to IPMS/USA for the chance to review them.