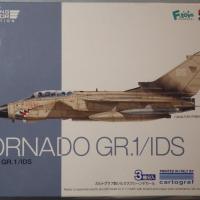 The Panavia Tornado is a family of twin-engine, variable-sweep wing multirole combat aircraft, jointly developed and manufactured by Italy, the United Kingdom, and West Germany.

There are three primary Tornado variants: the Tornado IDS fighter-bomber, the Tornado ECR (electronic combat/reconnaissance) and the Tornado ADV (air defense variant) interceptor aircraft. First flying in 1974, the aircraft was introduced into service in 1979–1980. Due to its multi-role design, it replaced several different fleets of aircraft in the adopting air forces of the three original partner nations. The Royal Saudi Air Force (RSAF) became the only export operator of the Tornado following a somewhat controversial trade deal.

The Tornado saw its first combat operations in the Gulf War in 1991, being flown by the Royal Air Force (RAF), Italian Air Force, and RSAF conducting many low-altitude strike missions. The Tornado continued strike operations in Bosnia, Kosovo, the Iraq War, Libya’s civil war, and in Afghanistan, Yemen and Syria.

Production of the aircraft was ceased in 1998, with almost 1,000 aircraft being built. However, Germany, Italy, and the RSAF continue to operate a limited fleet. The RAF officially retired the Tornado in April 2019.

Platz’s version of the Tornado, comes as a rebox of F-Toys’ 1/144 Tornado from 2009. In the box, you get two complete kits, with decals for 3 different planes operated by the original manufacturers England, Germany, and Spain. No markings for a RSAF plane are included with the kit. The sprues are small, but include some nice details and show little to no flash or mold lines on the parts. The clear parts for the canopy or a bit thick, but they’re crystal clear. The decal sheet is really packed with some nice markings, as well as a bunch of stencils found on the three different versions. The decals are by Cartograf and are very thin. The assemblies and decals for both kits come packed into a small box with an artist’s rendering of the RAF Tornado from the 1991 Gulf War on the cover, and markings and color schemes for all three offerings on the back.

The instructions are printed front and back on one small sheet of paper. One side has the 5 steps for building the plane, and a layout of the sprue parts, the other side has color drawings for painting and decaling the three choices. The instructions are mostly in Japanese, but the illustrations are clear and easy to understand.

Construction starts in the cockpit. The pilot and navigator seats and instrument panels are there, but don’t have much detail. I think in this scale, they work just fine and provide a decent base to work from for people who want to add more details in this miniscule workspace. The cockpit part is squeezed between the two sides of the forward part of the fuselage, which I found somewhat interesting. The front part of the fuselage is split in two vertically, and it tucks into the rear portion of the fuselage, which is split horizontally. When reviewing the instructions, I thought this would create some fit issues, but it all went together great. I did add a small amount of weight in front of and behind the cockpit part. The instructions didn’t call for this, and I’m not sure if it was necessary, but better safe than sorry.

Since it was necessary for the Tornado to operate well as a low-level supersonic strike aircraft, it was considered necessary for it to possess good high-speed and low-speed flight characteristics. Therefore, it was developed with a variable sweep wing, allowing it to perform in both the fighter-bomber role at low speeds, and in the interceptor role at high speeds. The kit allows you to build the plane with operable the variable sweep wing. The two wing parts are sandwiched between the upper and lower half of the rear fuselage. No glue is necessary for attaching the wings and the parts of the wings inside the fuselage have small gears which match up inside the fuselage. This gear allows you to move the wings in or out simultaneously. A slick design element for such a small kit.

As I mentioned the fuselage fits together nicely with only a little clean up being necessary for me. Once the fuselage is complete, the rest of the model is pretty simple. You attach the rudder, the jet engine nacelles, and the gear doors and landing gear and tires. The landing gear is a bit clunky and underwhelming, but the kit also provides an option to build it in-flight with the gear up; however, no stand is provided.

Once together, I decided to go with the shark-mouthed RAF version. As expected, the Cartograf decals worked flawlessly and everything settled down nicely with a little setting solution.

My overall impression is that this is a nice kit, that goes together quickly and with little fuss. It’s a great stress-free kit to put together over a weekend.

Thanks to Platz Models and IPMS-USA this review kit.