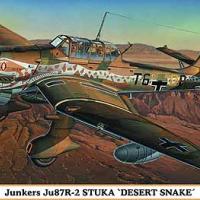 The Stuka - one of the most notorious aircraft for World War II. Hasegawa gives us a kit of the R-2 version used in Libya during the North African campaign in mid-1941. The R version was an extended range B model that increased the planes range from 600km (372 miles) to 1530km (950miles) with the added fuel tanks on the wings.

There are 118 of light gray plastic and seven clear plastic parts on six sprues in this “Limited Edition” kit. We get a large decal sheet with markings for two aircraft used in North Africa. The instruction sheet is logically laid out on four sheets with two addition sheets being the black and white color / decal schemes. An interesting note is that on the box top and instruction sheet, the swastika is shown as a diamond on the tail, I guess they don’t want to offend anyone. I did have a few scratches on the clear parts, since they were not in a protective bag.

Overall, the construction of this plane is straightforward with only a couple minor problems. The construction started with the cockpit, which is nicely detailed, but no seatbelts are provided. When you sandwich the finished cockpit into the fuselage halves, a little trimming is needs on the floor to get the halves to match. The cockpit seems bigger on the inside, then the outside. I added Eduard’s photo-etched set to really dress it up.

Moving on the wings and some work is required there. The top and bottom do not match up correctly and the panel lines done no match. Also, these was a lot of flash on the bottom wing half that needs to be removed. When you join he wing assembly to the fuselage, they don’t match up right. The wing root has a raised lip on the fuselage that is too tall for the wings. The drop tanks, wheel covers and tires had seams that need attention. So keep the putty handy.

The canopy is nice and thin, but the sprue attachments are on the frame sides and not on the bottom like newer kits, Be very careful removing them since this plastic seems very brittle. A couple dunking in future will result in a crystal clear canopy. I did cheat and bought a canopy mask from Eduard - that works awesome and saves so much time.

Painting was done with AK Interactive early German color set (made for armor, but works for aircraft too). A huge problem I had was the decals, especially the snake. I had to soak them for up to 5 minutes before they started to release. They are extremely thin and tear very easily. The snake is a challenge to position correctly, but take your time and work slowly. I did not and tore both of them, along with two of the balkenkreuz.

Hasegawa has been turning out Stuka kits at the rate of nearly one a year since 1994, including a whole array of Bs, Cs, Ds, Gs and now an R. They've had a long time to get this subject down and I think this kit is an excellent example of the results.

Thank you to Hasegawa - Hobbico, for the product and to IPMS-USA for the review sample.