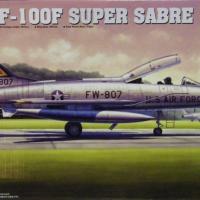 In the decade following the end of World War II, aircraft performance and design advanced at a dizzying pace. Proposed in 1951 and first flown in 1953, the North American F-100 Super Sabre followed in the footsteps of legendary P-51 Mustang and F-86 Sabre, and was the first American production fighter capable of flying at sustained supersonic speeds in level flight. Although intended as a clear-weather daytime air superiority fighter, the “Hun” saw its most notable service during the Vietnam War as a fighter-bomber. The quantum leap in performance over previous fighters was accompanied by an unprecedented accident rate, as Air Force pilots with supersonic experience were few and far between outside of the flight test community. In order to curb the high accident rate, North American developed a two-seat trainer variant on its own nickel, and the design rapidly evolved into a two-seat variant of the F-100D, designated F-100F. Although it did little to reduce the accident rate, the F-100F played an instrumental role in the birth of SEAD (suppression of enemy air defenses) mission as the first “Wild Weasel” platform and as a forward air control (FAC) aircraft.

Authenticity to Prototype: A

Trumpeter engineers and designers did and excellent job capturing the graceful lines, overall dimensions, and general layout of the F-100F compared to reference photos and drawings in Bert Kinzey’s F-100 Super Sabre in Detail and Scale.

The recessed panel line and rivet detail is finely captured in the light gray styrene, and raised cockpit, wheel well, and landing gear detail is well-executed and facilitates straight-forward painting and highlighting. Canopies and external lights are well-molded and crystal-clear. Flash and ejector pin marks are sparse, but there were a couple ejector pin marks on the rear cockpit deck and the speed brake which required a little TLC from Mr. Dissolved Putty.

Overall fit and alignment is pretty good. Wing fit to the fuselage was tight, but horizontal stab and nose gear fit were a bit loose and required extra attention to assure proper alignment during final assembly. The upper fuselage seam required little filler. Leading edge slat wells required minimal filling and follow-up attention with skinny sanding sticks. The intake duct seam was also relatively painless – as far as intake tubes are concerned. The fuselage belly seam was a bit concave, and required enough filling, sanding, and rescribing to make me a bit nervous in anticipation of applying a natural metal paint scheme. Also, the intake mouth had a seam that required some filling as well. Ideally, this should have been molded as a separate, single piece mating to the fuselage. Similarly, the afterburner can required careful filling of its longitudinal seam. Hopefully the contest judges won’t dwell too long there with their little flashlights.

The kit includes separate parts for the rudder, flaps, ailerons, leading edge slats, speed brakes, and centerline main landing gear doors. Ironically, I could find very few, if any, photos of F-100s on the ramp with drooping flaps or a deflected rudder. Also included are two types of in-flight refueling probe, and extended or folded pitot boom options. Disappointingly, no parts are provided to secure the canopy in the open position.

Cockpit detail, as noted earlier, is crisp and is accurate to reference photos. Seats are well-done, but lack harness and buckle detail. Similarly, landing gear and wheel wells are nicely reproduced and pretty convincing right out of the box.

Under-wing fuel tanks are included, as well as pylons and early AIM-9 Sidewinders and triple ejector racks for iron bombs (not included). An ALQ-31 pod and “practice bomb” (can you say “mushroom cloud?”) are included for the centerline station.

Decal images are crisp and printed in register. The decal film itself feels thin and “crinkly” coming off the backing paper, but responds well to the Microscale System and conforms well to surface detail.

Color, however, is a different story. If the Thunderbird markings in the photos appear to be red, white, and black…well…they are. Still, I wanted a Thunderbird “Hun,” so I used them. Despite the improper color, they still yield a striking effect. The decals for the 48th and Taiwan appear to have proper color. Go figure.

Although thin and well-conforming, I noticed the Thunderbird markings were not completely opaque, as evidenced on the overlap seam in the white portion on the underside of the nose. On a similar note, although I thought I found a good color match to the red with Testors Guards Red, it appeared significantly darker when lightly painted over nicks or exposed areas in the red decals.

Assembly instructions are okay, but there are some part number errors and omissions. Painting instructions required careful validation against reference photos, namely in the cockpit area.

Painting and marking instructions are provided on a separate, full-color sheet, and include references to Mr. Hobby, Vallejo, Model Master (enamel), Tamiya, and Humbrol colors.

All things considered, Trumpeter has delivered a solid example of the F-100F to the quarter scale jet modeler. The overall impression when viewing the finished product is striking, despite some of the noted issues with the kit, and already has me flirting with the thought of picking up a –C or –D model for the stash.

I highly recommend Trumpy’s F-100F to experienced aircraft modelers looking for an eye-popping addition to their jet collections, and to modelers of intermediate skill looking to stretch their skill with a potentially high pay-off.

Thanks to Stevens International for providing the Trumpeter review sample.