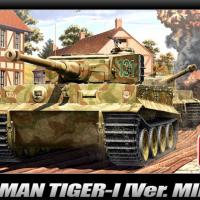 Academy is re-releasing their 1/35 Tiger I, this one being the “Mid” version and in a special boxing for the 70th Anniversary of D-Day.

Upon opening a large box you are greeted by 10 sprues –many of which are part of the “early” boxing- plus two small photo-etch frets (engine grille covers/zimmerit tool) and plastic tracks, representing the “combat” (wide) tracks.

The part count is considerable (over 250 parts) however several pieces won’t be needed. I estimate a bit over 200 parts are required to complete this model. All the parts are crisp, perfectly molded and have no flash.

This boxing does not include the full interior –as other boxings- but it has a new tooled turret. I will be honest, it looks very similar to the original one (still included in the box) however it is possible to see a slightly asymmetry when looking at it from the top. It is very subtle, but it is there.

Being a Tiger model from the Mid-production range; all of them had zimmerit applied at the factory. Instructions on how to simulate zimmerit using putty and a photo-etch tool are provided. The photo-etch tool has two pattern sizes, 0.5 mm and 0.7 mm, which should be used in the hull and turret respectively.

A highlight of this boxing is the decal sheet. You are provided with a total of 11 camouflage patterns (including a couple of Eastern Front examples and one in the Italian front) and markings for over 20 different tanks.

The instruction sheet is clearly printed and well detailed. There are a total of 15 steps required to assemble this tank, however some steps have to be repeated multiple times.