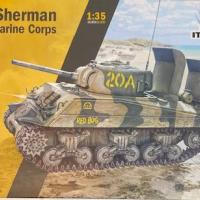 This kit is a rerelease from an older one by Italeri. What has changed is the decal sheet. The kit is an easy build in one of four different versions, and I have chosen to model the Marine Corps Pelielu Island from August 1944.

The contents of the kit are on five olive green styrene sprues. Also included in the box are a set of rubber tracks, a piece of plastic mesh for the deep wading tank screens, and decals for 4 schemes. There are evident sink marks throughout, mostly in places that would not be normally seen.

The kit instructions are a large booklet with 9 steps to complete the model. The ninth step shows assembly and application of the deep wading vents for one of the versions.

The four versions of the model are:

The first step was deciding the version of tank you wanted to build. There was an insert for the engine deck cut out to make an A or C version. The conversion from the kit body was basically cutting out and replacing engine cover grills. I chose not to change anything on the engine deck.

Next was the chassis for the tank. The model gives you two types of road wheels either wheels with a spoke or a solid dish wheel. Each bogie and suspension unit (there are three on the left and three on the right) has ten parts for assembly and the instructions allow for intermixing of the wheel types. These units were easily built.

Turret construction was next, and I wanted to give the turret a casting construction look so I thinned some Tamiya putty with Tamiya glue and applied that mix to the turret with a stippling technique using a stiff brush. The turret construction was straight forward and easily accomplished. The main gun has a seam down the middle of it, so care is needed to file the seam and keep the guns round shape. For the commanders view ports in the cupola I painted light gray then used MMP 65 Gloss Sea Blue thinned with 90% thinner and after that was dry, filled the areas with Future to give them a glass look.

The remainder of assembly was to add hand tools, lights and framing around the lights.

As I said erlier the final step of assembly would be the wading vents attached to the back of the body if you wanted to build that version.

The tracks were glued with C/A and sprayed with flat black Krylon primer then covered with Tamiya TS-80 flat clear then weathered with track wash and earth and desert pigments.

To prime this model, I decided to use Krylon color maxx paint and primer in flat black. I covered the model with about eight quick sprays from the can. Initially when the primer is applied the finish does not look all that great but wait a couple of hours and the primer shrinks as it dries to expose the slightest of details and looks fantastic. The can I use is enough to prime 10 different 1/35 models and can be purchased at hardware stores for $4.00 a can. The primer applied with this product makes quick work of getting your models primed providing an excellent base for future layers of acrylic or lacquer paint and no airbrush cleaning needed.

Once the paint had dried, I lightened the MMP 21 paint with 20 percent MMP 1 white and shot that through a Scotch Bright scouring pad to give a faded mottled look to the overall paint scheme. Then I applied the paint to “highlight” areas on the top of the turret, and various places on the body.

When all the paint had dried. I applied a filter of light green over all the model to blend the colors applied so far. The filter was made with Abteilung 502 Olive Green with 10% 502 Buff.

When the filter had dried it was time for a pin wash made from 502 Burnt Umber and 502 Shadow Brown.

For paint chipping I used Mission Models Paint black, brown and red. That mixed color was applied to areas susceptible to chipping on the real vehicle via foam pad pieces dipped in the paint. The foam was dabbed on a paper towel to remove most of the paint, then applied to the model. The Sherman did not have very many paint chips on it.

Again, I used Abteilung 502 paints Light Green, Dark Green, Blue and Buff to apply a dot filter to the tank and then blended the colors. Vertical brush strokes on the sides, a stippling motion on all the horizontal surfaces.

For the tools with wooden handles I painted them with MMP 38 Desert Tan and when that was dry, I applied Tamiya panel liner Dark Brown to give a wood appearance. The Metal tools were painted with MMM 002 Cold Rolled Steel.

After applying the decals, I applied a clear coat over the whole model. I used Mission Models Semi-Gloss Clear MMA 005, 30% Clear 70% thinner sprayed in light coats to give the model an even coating and covering the decals.

I applied some 502 Engine Grease oil on a paper towel to remove some of the carrier oil and dry the color. I then applied some of the oil to a brush and wiped almost all off the oil color off the brush. I was then able to apply shadow and stain marks to the model using the dry brush method applying very little oil paint each time to the areas I wanted to darken.

I made the rain streaks from a mixture of MMP MMP44 British light stone and MMP37 IDF Sand Gray Thinned 90% with MMP Thinner. That was brushed on the sides of the tank body in a streaking vertical motion.

Highlighting some areas of sharp angles on the model was done with graphite to give it a metalized look.

I used Vallejo pigments Light Dust and European Dust to the running gear and fender areas to give a dusty look to the model. I applied the pigments quite heavily then came back four different times to remove layers of the pigments and get to the amount of dust I was looking for.

The final addition to the model was mud splatters, this used again my rain wash mixture to wet a brush and flick it off my brush using a tooth pick applied mostly to the running gear, rear of the body and on the engine deck.

I used Tamiya TS-80 flat clear to cover the model and take the shiny sheen off it. When that was dry, I came back in a few small areas with the faded MMP 21 and sprayed some of the base coat to give a varied sheen overall.

This is a good basic level modeler to start modelling Armor. It goes together fast and easy with a little clean up of the parts and the quicker the build the quicker to the painting and weathering stage. All armor builders will eventually build a Sherman, this could be that kit.

Thank you to MRC and IPMS for the opportunity to build and review this model.