Standard B "Liberty" with WW1 US Dr 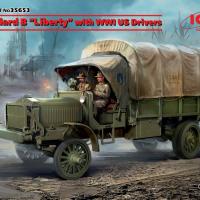 ICM continues to crank out some lovely combo kits these days, especially around World War 1 subjects. This kit, which includes both their previously released Type B Cargo Truck, as well as US drivers, is an example of this.

The Standard Type B Liberty Truck was the first standardized vehicle ever produced by the U.S. armed forces and was essentially an attempt to reduce the enormous inventory parts problems then associated with logistical support as well as come up with something that had all the best features of trucks of the time. It was produced by some fifteen firms to rigid specifications and served overseas starting around fall of 1918, so they were in service for little over a month before the end of the war. A large number of these were sold off to private companies and some served with postwar armies around Europe. All told almost 10,000 were produced – a prodigious number of one vehicle for those times.

ICM’s kit is a virtually trouble-free assembly, as is evidenced by the fact that I needed no filler for either the truck itself or the figures. The truck comes with a couple of options, most notably the closed or open cargo cover. It also has an odd choice of extra hub for one of the front wheels, although for the life of me I could not determine why. In any case, I went with the standard hubs all around. The tailgate, surprisingly, cannot be mounted in the down position per assembly, although it would take only a modicum of scratch building to convert this. Nonetheless, it does limit diorama possibilities as it stands.

The figures are an easy assembly with a minimum number of parts, although I find myself debating the uniform choice. By late 1918 I rather doubt that the average American GI was still wearing the “Smokey” hat, so I switched out the driver’s chapeau for a more likely tin helmet from ICM’s US Equipment set. I figured officers would be more likely to retain their original headgear longer, so left it in place for the passenger.

As I chose a machine used by the Marines, I painted the driver in a more field green outfit to suit the branch. The officer would have had more ready access to the latest uniform offering, so I put him in standard army brown. The figures painted up well enough and fit into the cab with no difficulty whatsoever. I show the figures in the cab without the rain canopy, as they’re not particularly easy to see with it on.

All in all, this is a lovely set with no problems encountered during assembly. Since so many of these found themselves in civilian service after the war, the diorama possibilities are definitely there. Obviously, I’m going to put a load on my truck before it goes into my collection, but wanted to exhibit it with what actually comes with the kit. I can’t fault this model on any level, and definitely can recommend it for any aficionado of World War One equipment without hesitation. Fun indeed!

As always, my thanks to ICM for their continued dedication to this important period in history, as well as to IPMS/USA for a chance to add this lovely piece to my collection. Stay safe, everyone, and happy modeling!