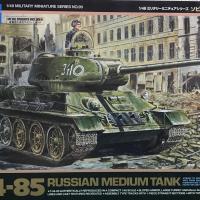 A surprising swing and a miss for Tamiya on this kit. Technically this kit is very well done, but it’s rather boring and uninspiring. The kit is well engineered with many "modeler-friendly" features that make it a simple, quick build. The kit is molded in dark green plastic with hull weights, link-and-length tracks, poly caps, braided copper wire for the tow cables. Decals depict two vehicles from the Battle of Berlin in 1945. This is a "new tool" kit that does not use any parts from Tamiya’s earlier T-34/76 kit with the die-cast hull.

The T34/85 was a re-evaluation of the trusty T34/76 that had run into trouble against powerful German foes like the Tiger I and Panther. It had a larger, heavier-armored turret with 85mm gun, and was manufactured from January 1944. Soviet factories produced 25,000 T-34/85s by 1946, and it even served other militaries in the Warsaw Pact and was also exported to client states, taking part in the Korean and Vietnam Wars.

The details on this kit are good, but like many of Tamiya’s 1/48 scale armor kits much of the detail is somewhat simplified. The surface detail and weld marks on the turret are good. Overall, there really was not anything detail-wise that reached out and "wowed" me.

Beyond some interior detail on the hatches there is no interior detail. Wire screens on the engine intake are molded plastic. The tracks are nicely detailed for this scale. The coaxial and bow machine gun barrels need to be drilled out.

The tracks are the now standard Tamiya link-and-length tracks which are probably the most trouble-free track sets on the market today. They always fit, and they always complete the track run with no gaps and the appropriate sag.

Tamiya was certainly going for simplicity at the expense of finessed detail with this kit.

The tank commander figure is stiff and unconvincing. This is a big hold in 1/48 scale armor kits. As well as Tamiya has been doing with their 1/35 scale figure it would be nice to see them turn out some interesting figures in this smaller scale.

This kit goes together very easily and quickly built out of the box. The suspension is simple, and the road wheels all fit in place straight and level. It would be hard to have a more perfect fitting and aligned suspension on a scale model kit.

The seams for the turret parts are largely hidden in the prominent weld seams. Some work will remain to be done to make the seams look like weld beads, but it is still a great example of ‘modeler -friendly’ engineering on Tamiya’s part. While we are speaking of seams, the exterior fuel tanks are designed so that the seams are completely hidden. This put a smile on my face.

Tamiya has probably perfected the science of link-and-length tracks. The instructions provide a perfect guide for the placement of the individual links and larger top and bottom track runs. There are no maddening gaps or excessive sag in these tracks. The only down-side to the tracks in this kit are the unfortunate ejector pin marks. Luckily, T-34 tracks have flat inside faces which makes these marks very simple to sand off.

There were also some ejector pin marks on the inside of the hatches which required some attention.

There really isn’t much to say about the fit on this kit. It went together like all other Tamiya armor kits, which is to say; perfectly. No cleanup was required with the exception of a few seams on the wheels and gun barrel.

Tamiya gives you their standard, well thought out, well-illustrated, multi-lingual instruction sheet and a separate black and white sheet with painting and decal placement instructions. It will be very difficult to get lost with these directions.

I’m sad to say Tamiya completely dropped the ball on this kit when it came to the markings. The T-34/85 has been used by dozens of countries across the world from the deserts of the Middle East to the mountains of Korea, to the steppes of Manchuria and the best Tamiya can come up with is Soviet markings from Berlin in 1945 that have been done to death by almost every other model manufacturer? Yawn. I am simply amazed that they couldn’t have provided something even slightly more interesting like North Korean or even Polish marking options.

Besides the uninspiring marking choices, the decals fall short in that they are so thick that it’s almost impossible to get that "painted on" look no matter how much decal solvent you use.

This kit was pleasant to build, but I’m sorry to say that overall, it didn’t seem like Tamiya was trying very hard when they developed this kit. Even the box art seemed a step below their normally high standards. There really was not anything innovative or imaginative about the kit that made me want to go out and build another one, which is a shame because there is a lot of potential with this tank. On a positive note, there is plenty of potential to either add aftermarket parts or alter some features to make it accurate for other variations of the T-34/85. With just a little research, scratch building a few parts, and creating some stencils for markings I was able to alter this kit into a Czech manufactured Egyptian T-34/85 circa 1956. It’s just a pity that Tamiya didn’t think of something interesting like that.