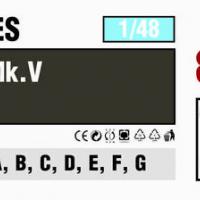 Once more a rousing THANK YOU VERY MUCH to our friends at Eduard in Czechoslovakia! How I ended up doing this review? A co-reviewer ran into some personal difficulties and I volunteered to finish his review for him. Thanks David for sending these items, and John for supporting my effort to help a fellow reviewer.

When I received the box from David, I knew what I was getting. The review will be in four separate tomes: first, this one, to cover the Overtree kit, the resin Brassin wheel set, a brassin etch detail fret, and the Overtree stencil decal set.

Eduard is on to something here, and it’s very sensible to me. The Overtrees line provides an economical alternative to buying a full-up kit with more decals, resin, etc, and I am very appreciative to Eduard for doing the “pick and choose what you want” method. In this manner, you will have option to build just a plastic kit, or go all the way with PE, resin, whatever else is out there. AND, if you bought one of the ProfiPak kits from Eduard, this provides a viable option to use much of the remaining decals on a second and even third airplane out of the five usually provided. Eduard, this is VERY generous, in that you are not making it mandatory to pay for extra “stuff” some people don’t want/have skills for, etc. Many do not like the additional bits and bobs, but just the basic plastic. CHOICE! (rah!)

I had not built my previously-purchased Tempests, as they were not in my current build sequence (but try to buy one now after they have ALREADY started to get scarce) and was not up to speed on the assembly of said kit. No matter, I dutifully plowed in after I finished MY review items. My fearless leaders are painfully aware of life, timelines, etc., as am I, and I did not offer to do this build until the other responsibilities were already built and had maybe a day or two of work left. The moons aligned, and I started the Tempest a week after asking for it and having it show up, which is when I finished my last review (Airfix’s re-release of their 1/48 English Electric Lightning kit).

After four days of building the plastic cockpit and all with the PE set, the fuselage interior was painted. Interior gray green (Uh, British, yeah) for the entire interior, with the cockpit from the elbows up (just above the cockpit structure cage assembly, look at your reference), I was ready to tackle the wangs. The multi-part gear well walls had their details added per the instruction, and using liquid cement sealed the deal. I took time to ensure all the parts had all the runner tabs and pour stub locations cleaned and smoothed out, and the parts were literally clicking into place. Ailerons slipped into place with positive location, and then I was ready to assemble wings to the fuselage. As I began for the fifth evening… I noted…

Somehow I had sturdily cemented the entire cockpit bird cage into the fuselage about 1/8“ too far aft.

Pooh said Winnie. (And some other colorful muttered words, too. I know nobody else screws up like this, so have fun poking the bear. And I was SO MUCH ON TIME!)

Next day after calming down, I ordered a replacement kit. THANK GOD my go-to guys in KC had one. (This Overtree version does not include the later Tempest Overtree with sprue “G”, which includes the drop tanks; I was potentially facing a long wait or a lot of time on Evil Baij to find one).

Starting over again, I removed (tore apart the fuselage, really) and lifted the detailed cockpit from its superglue tomb, cleaned up a few things, used the new bulkheads and side rail assemblies and then transferred as much as I could to the new cockpit. 3 hours later, I had the cockpit PROPERLY ensconsed in the fuselage, with the wing cement join rapidly setting under the effect of my favorite welding cement. God smiles on me every day (THANKS again!) Oh, and keep checking to make sure the lower wing fillet area sits tight on the fuselage, it’s a tight fit and mine popped up a few times while the cement dried)

The parts for this particular kit omit a few things I feel should be basics for Tempest… the intake filter, and some detail bits in the front cowling. That’s how the detail bits make up the paychecks for the company, and until I become a member of Eduard’s team who are contributing REAL money to their survival, I shall not snipe from the shadows as a coward. I just found it interesting. I also, at this point, I had sudden realization the propeller has no shaft /boss assembly, but the spinner and propeller assembly just pops firmly into place in an awkward, non-spinning form of butt-joint to the gaping maw of the forward upper fuselage. I shall assume this was to simplify installing the resin engine in to the kit. And again, I don’t play with my aircraft, so it’s really ok. Just different. Do like the safety of a free-spinning prop in an area of society where those who admire the work ALWAYS have to try the prop. This is no Bueno for those times when subject unwashed public members pick up and fondle your models… A broken prop because it doesn’t spin, and depending on my mood at the time, I get to go before the judge on trumped up charges (“Well, your honor, he broke my model airplane propeller and I just snapped… ha ha get it yer honor? In any event, he broke over 48 hours of work on my kit, and deserved killin’, as we say in Southeast Oklahoma”)

I have a personal fix for the spinning prop, but no time to apply this fix today. Too much to do, but it involves evergreen plastic rod and tubing of mated size, and a few sprue cutoff bits held in place by Superglue.

After this, the build really was fast; choosing the High-speed silver Post-war bird because it had rockets in place was the end game. (How many Tempests can I have with exactly the same camo? A lot…). A few detail notes here: The tail wheel is a two-part anti-shimmy wheel, where the center tread area is recessed… that makes the wheel not bobble around so much “Shimmying” like a shopping cart/buggy wheel, and is a nice detail touch. If you buy the kit with the extra sprue on it for external tanks, the mounting fairings are in clear plastic like the actual item, to which decals are applied, indicating metal structure.

I used Vallejo Dark aluminum acrylic, airbrushed at too high a PSI setting, but the glosscoat levelled it all out. I took the decals from the Profipack kit, and proceeded to have a couple of fun days.

Note. I used the stand alone sheet for stencils, and they worked as well as the Main decals. Top shelf, these decals… not a speck out of place.

Satin Vallejo spray can (THAT STUFF IS G REAT!) over all, pull the masking off the canopy and walkway, then home stretch.

Touch up the under spray on the wing walkways, install the exhausts which were previously painted burnt iron, install the main gear, wheels and tail gear fork and wheel, then spend a couple of quality evenings doing the underwing rockets. The kit ones work great, and short no-rail stubs are on the sprue, but I surmise those are for the Centurion powered Tempest II and Sea fury, we’ll see what comes up. In the interim, I like this kit more than I bargained for, and have tossed in for the resin engine, gun bays, and cockpit with brass gear for my next build. Just because I can… the engine looks just overwhelming!

Eduard, even though I am not the Tempest Expert, (Roy Sutherland is your man) I grade this one the new standard for Tempests, and am now waiting for your Ponies to show up. Won’t be at the NATS this year, but SAN MARCOS, well, that’s a gotta do. See ya in 2020…

Thanks again John and Phil for trusting me once more (and this review with three AM bits was done in four weeks, EVEN WITH having to restart halfway through…