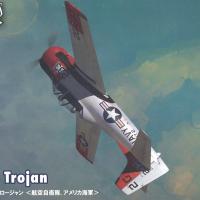 The North American Aviation T-28 Trojan is a piston-engined military trainer aircraft used by the United States Air Force and United States Navy beginning in the 1950s. Besides its use as a trainer, the T-28 was successfully employed as a counter-insurgency (COIN) aircraft, primarily during the Vietnam War. T-28s were built from 1950 to 1957.

The T-28 was North American’s follow-on for the famous T-6 Texan. Probably the biggest improvement in the T-28 over the T-6 was the change from tail wheel to tricycle gear. Several pilots, including Brian Baker, have told me that landing a tricycle aircraft is a piece of cake, but tail wheel planes tend to want to ground loop.

You get the usual big sprue with the wing bottom separate. The clear parts are thoughtfully in their own tiny plastic bag, which reduces damage and scratches. There’s also a nicely done resin engine.

There was a small problem with the parts, as parts 3 through 7, gear doors, had separated from the sprue. They are placed at the end of the tree, with no protection against being banged against the end of the box. Sword should not feel bad about this, as the entire part broke free. I had a heck of a time fixing the propellers on my Airfix Hampden which were unprotected at the end of the tree. But only one prop blade broke off of each one. Airfix later fixed this.

You also get two large decal sheets which are printed by Eduard. The box side lets you know that you can build one of three US Navy T-28Bs or Japanese Air Self Defense Force RT-28 or a JASDF T-28.

You start with the cockpit. The instructions give you the colors and locations to paint the instruments and consoles. I’m glad I found the decals for the panels and consoles before I went to all this trouble. They’re not mentioned in the instructions, but they certainly add a lot to the cockpit. I turned the panels around, as there are circles indicating where the instruments go on one side, and these would make it tougher to get the decals on cleanly. The other side is perfectly flat, so it’s nicer for decals.

The separate seat cushions add a nice touch to the cockpits. When the cockpits are finished, the assembly is put into the fuselage halves. The instructions call for “min. 10g” weight in the nose. Because I built my Trojan with the canopies open, the 10 grams is minimally sufficient. I would suggest at least 12 if you’re opening the canopies because their weight will be positioned behind center of balance.

The landing gear wells are separate parts. I had to test fit and file a bit on the wing wheel well walls to get the wings to go together nicely.

The wings fit to the fuselage, and I only had to use a bit of Mr. Surfacer to clean up the minimal gap.

I did some detail painting on the engine and installed it. I put a piece of Saran Wrap in front of the engine when I installed the cowling to act as a mask. That worked fine.

Once the horizontal stabilizers were added, I was ready to paint.

The paint scheme looks daunting, but it was actually fairly easy. I masked the cockpit area and painted the entire aircraft with Floquil Reefer White. I then applied masks to the vertical stabilizer, outer wing and nose and painted these areas with Testors Insignia red. The area on the cowl in front of the cockpit was then masked and painted using Floquil Grimy Black, which was also used on the prop.

I put a coat of Future on as a base for the decals and got out the Micro Sol and Micro Set.

The decals are nicely printed, in register, and are thin. The thinness caused me some problems. The large areas on the fuselage side which protect it from the exhaust gases had a fairly high degree of difficulty. One folded, one cracked. But I got them on. The other decals were less problematical. The instructions for the main markings were quite good.

After another coat of Future to seal the decals and a coat of Testors acrylic flat, I added all the parts I’m sure I’d destroy while putting on the decals.
The gear doors and gear went together well, everything fit. I had to drill out the back of the prop to get it to mount on the engine’s crankshaft, but I lucked out, and it fits so tightly I didn’t have to glue it.

Sword provides a super-looking 3-part canopy, and then gives no indication of how it should look when open. A quick visit to Airliners.net gave me this info.

Highly recommended. The 5-color schemes are wonderfully bright, you can do USN or Japanese, and there weren’t any huge problems building this kit. I find it to be a large improvement over the previous 1/72 T-28s.

Thanks to Sword and MMD/Squadron for providing this kit and to UPMS/USA for the chance to build a good-looking trainer.

Instrument panels, front and back

Above right rear
Previous Next