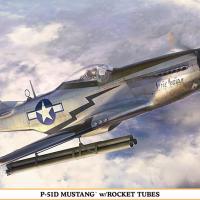 The North American Company’s P-51 is well – known for the massive aerial dogfights with the Luftwaffe during World War II. A lesser-known use of the P-51 was a strafing aircraft, shooting up targets of opportunity. This model depicts one of the many armament loads that P-51s used for strafing.

The kit comes with 125 pieces, with most molded from polystyrene. There are three parts molded in metal, and another 10 parts molded in a resin. Decals are included for two aircraft, one based in India, and the second based on Iwo Jima.

Overall, the fit of the basic P-51 kit parts is good. There are some deviations from the kit instructions that I would highly recommend, and the first is in Step 3. Hold off gluing part C34 (the headrest) until the exterior is finished and all antennas and other external details are installed, to include decals. Mine broke off while I was putting the decals on, and it had been getting in the way prior to my accidentally breaking it off.

Another part I would suggest to leave off is in Step 4, parts C31 and C32 (oil tank halves). Glue these together and then glue them onto bulkhead C11 after gluing C11 in place. This makes it easier to install the bulkhead and cockpit floor at the proper angles.

The machine guns (Steps 10 and 11) should be left out of the wings until the paint and decals are completed. I failed to do so on my kit, and it was hard to paint around those six barrels sticking out of the wing.

Use caution in Step 12, where there are instructions to drill a hole for a Directional Finder (DF) or “loop” antenna installation. Only one of the two paint schemes had the DF antenna installed. Also in Step 12, the wing cover panels may not both fit flush into the recesses over the gun bays, and the cowling over the engine on my sample did not fit entirely flush onto the fuselage.

The hardest step in the instructions and assembling the model is step 15, where the rocket tubes are assembled and installed on the wing. There is a plan view of the bottom of the wing – but use it with caution. My recommendation is to drill the two forward holes, then use the metal mounting braces to locate the aft holes. What I experienced was that the two aft holes, although drilled according to the instructions, would not line up with the locating pins on the metal supports.

Another item that makes assembling Step 15 difficult is that the plastic that was used is a totally different type of plastic than the kit. I wound up having to use superglue to glue the resin pieces together, as the normal model cement I was using did not work on the resin. In addition, one of my tube assemblies came slightly bowed, and I was able to get most of the bow out of the tube assembly.

If the modeler has the skills, I would recommend scratch building the tube assemblies for the rockets on the wings. I believe that would render a more realistic representation of the rocket tube assemblies.

I applied the decals after a coat of Pledge Floor Care, and they went down smoothly, snuggling right against the kit beautifully.

Thanks go out to Hasegawa USA - Hobbico for providing the review kit and to the IPMS USA for allowing me to review it.