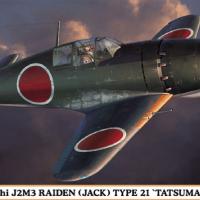 The J2M2 Raiden (Jack) was designed to achieve a high rate of climb in order to intercept incoming bombers. The aircraft went into full scale production in 1943 and early models included two cowl 7.7mm machine guns and 20mm wing cannons. Later versions omitted the cowl guns and relied on the heavy wing armament instead. It was used extensively late in the war as a bomber interceptor and proved to be one of favorite aircraft of Japanese pilots for this task. There were a total of about 500 aircraft built by the end of World War II and only one surviving example of this aircraft today located at the Planes of Fame Museum in Chino, CA.

The assembly begins with the cockpit and has 18 pieces alone. The interior when completed is quite spacious and many of the details are visible once the rest of the fuselage and canopy is installed. I used Mr Color 126, Mitsubishi Cockpit Color, for the interior and utilized an Eduard photo etch seat belt for the seat. I added some minor wear details with a silver pencil and some Tamiya weathering effects.

After the cockpit assembly was completed, the fuselage halves go together and the top and bottom of the wings are mated. There was some minor filling and sanding done with the wing underside joining the fuselage with Mr Surfacer 1000, but the majority of any seams was simply sanded away.

The remaining stage of assembly was mounting of the nose, propeller, and canopy. The canopy is one piece which is good in some aspects but if you wanted to build one with a canopy opened would require some fine surgery. After the canopy was attached, I masked it off with an Eduard canopy set and then applied cockpit color to the canopy to give the interior frame color.

The final step before painting I primed the kit with Alclad grey primer and addressed any flaws or seams accordingly. I started with the underside color using Model Master enamel IJN Grey and once dry followed up with Mitsubishi Dark Green. After letting the paint set for a few days I began masking the kit for the anti-glare panel with Model Master Interior Black and then used Orange Yellow for the leading edge markings. Once completed and removed the masks I needed to address some minor yellow overspray issues and I was ready for decals.

Thankfully the Model Master paints had a high gloss finish to them so there was no need for me to apply a gloss cote for the decals to adhere better. I first applied the decals for the propeller and was very satisfied with how well they adhered with a little Solvaset. Next was the unit markings, walkways, and Hinomaru’s. After a day and the decals dried I applied a light misting of semi-gloss cote to seal in the decals for a matt finish.

The last and final step was fitting of the landing gear and gun barrels. I drilled out the 20mm barrels and mounted the propeller.

I enjoyed this kit very much for its simplicity and ease of construction. I would like to thank Hobbico Hasegawa for supplying the example for review and the IPMS USA for allowing me the chance to perform the review. .