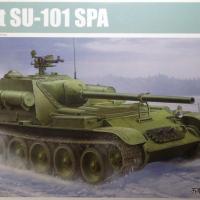 One of Trumpeter’s latest releases is a somewhat odd choice. After all, only one version of the SU-101 self-propelled artillery vehicle was ever manufactured, and it never made it past the trial stage. Still, with a number of “paper Panzer” kits out there, it’s not always too surprising to see what choices model companies provide. Also, with the increased interest in online video games like World of Tanks, there seems to be a new interest in these proposed, or prototype versions.

The Soviets developed the SU-101 as a turretless AFV in late 1944, with the intention of using it to replace the SU-100. It was built on the chassis of the T-44, and was armed with the 100 mm D-10 tank gun, which was the same gun on the SU-100. The main difference between the SU-101 and the SU-100 was locations of the crew compartment and the engine. On the SU-100, the crew compartment was at the front of the vehicle, with the engine in the rear. This design created maneuverability issues, and put added stress on the front suspension. The SU-101 reversed the crew and engine locations, which created better maneuverability and better distribution of the vehicles weight over the wheels and suspension. However, only one SU-101 was built and the design never became operational.

Trumpeter’s kit comes in a sturdy, top-opening box with light grey plastic sprues, with a small clear sprue for the headlamp, a small photo-etch sprue for some handles and a grill cover, and two tan sprues for the tracks. The kit has just over 340 pieces, but quite a few of these are not used in the construction. The road wheels are molded with the tires separately, and the gun is molded in two pieces. The kit also provides a small decal sheet, but none of the photos of the actual tank indicate any markings were ever applied to the vehicle. The majority of the parts are crisply molded with almost no flash. The one area where this isn’t the case, is the tires for the road wheels. Each one of these has a small seam around the entire tire, which will have to be removed prior to assembly. The tracks are provided in "link and length" and are flash free with excellent details.

The lower hull goes together very quickly, with the most of the attention spent cleaning the flash and ejector marks on the tires. With 20 individual tires to clean, this process was pretty tedious, but not too horrible, and the fit between the road wheels and tires was excellent. The chassis is next, and it also goes together smoothly with some nice details. Adding the photoetch to the engine cover allows the vents over the engine compartment to be visible, which is a nice detail. The hull and lower chassis go together without any issues. In fact, the fit of the model is outstanding. I didn’t have a single fit issue with the kit. The kit also provides a very nice version of the 12.7 mm DShK machine gun.

My only complaint with the kit was the auxiliary fuel tanks. There are two tanks per side of the crew compartment. The two on the left and right side of the vehicle consist of 10 pieces each. While I appreciated the details, assembling these tanks was a considerable amount of effort, and in the end, all but five pieces will be all but entirely invisible. Seemed like a little overkill, but if my biggest complaint is that the kit is too detailed, that’s hardly a complaint at all.

A more creative modeler could build this into a “what if” version with better camouflage choices or use a “skin” from one of the choices available in the World of Tanks game, but I chose to go with the real-life version.

Overall, I recommend this kit for any level builder. Once you get past the clean-up of the wheels, the kit goes together very nicely and has a very nice fit. The details are well done, and construction is very straight-forward and stress-free.