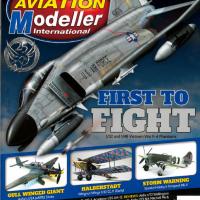 SAM Publications is an independent publisher based in Bedford UK. Established over 25 years ago, they have gone onto become a household name in the hobby sector. SAM Publications prides itself on producing quality publications, well researched and affordable to customers. SAM Publications is noted for their magazines, Scale Aviation Modeller International and Scale Military Modeler International magazines, as well as their series of monographs with Modellers Datafiles and Modellers Datafile – Scaled Down.. SAM has not stood still over the past 25 years and has adopted to the ever-changing publishing industry. Technology has played a big part in this and has only enhanced the quality of their publications by allowing them to reach out to authors and researchers all over the world. You can see that most evident in this issue of SAMI, with a contribution from American Floyd Werner (although he will always be a Texan) and his review of the Eduard 1/48 Phantom II.

Scale Aircraft Modelling International’s (SAMI) July 2019 issue is in their standard A4 format softbound magazine that is 84 pages, including covers. SAMI is meant to complement the internet with a focus on covering full build reviews, reference material, as well as the latest products in the market. This issue features six full build reviews with clear color photographs documenting the preparation and assembly of the model. Supporting Rich Morgan’s and Floyd Werner’s F-4 Phantom II builds are eight color profiles by Ryan Dorling (see Page 13 below). There are two First Look one-page non-build reviews that include color photographs of the parts in the kit. There are eight shorter build reviews that are one or two pages in length with the color photographs highlighting the finished build. Finally, there are short notes on the latest kits, accessories, decals, and reference books that are either available, or coming soon.

All of the feature articles were well done, but one really caught my attention as I have this Airfix 1/24 Junkers Stuka kit that stares at me from above at my build table. Guy Goodwin has a good time with the build of this elderly beast and produces a very attractive model. He did add a bit of scratch-building, some HGW seat belts, instrument placards, and a Master machine gun barrel for the rear gunner that puts the gilding on this dive bomber.

My thanks to SAM Publications and IPMS/USA for the chance to review this magazine issue.