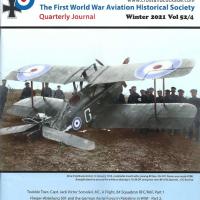 The Winter 2021 journal of Cross & Cockade International features a nice sharp black and white photograph of a RAF SE5a that was brought down by ground fire. Flying C5329 January 13, 1918, 84th Squadron’s Lt. H.E. Davies became a POW. The rear cover and rear inside cover feature period black and white photographs of 84th Squadron aircraft, including RAF SE5a B4876, Sopwith F.1 Camel B3941, Sopwith Bomber A6945, and a Sopwith Pup totally upside down resting on its upper wing. The center section, The Gazetteer, consists of sixteen black and white photos, and sixteen black and white maps. Also included is a separate folded color 1/100,000 map consisting of eight pages when folded up. This issue’s map focuses on Marche and Namur Flying Sites.

Canadian airmen are again a topic from the late Stewart K. Taylor kicks off this issue with a nineteen-page tale article on Twinkle Toes. The initial installment of this biography of Capt. Jack Victor Sorsoleil is brought to life through interviews, letters and diaries of airmen who served with Sorsoleil. Thirty-eight period photographs accompany this nineteen page article. Two photographs of the 4’11” Sorsoleil, aka ‘Sors’, are on Page 53-220. Despite the dancing couple depicted on this page, Jack did not gain the nickname “Twinkle Toes” by dancing, but by being fastidious about his appearance. This included making sure that his shoes were shined to the point where they sparkled. A nice photograph of ‘Sors’ is on Page 52.236 as he stands in front of A4563, a SE5a that ‘Sors’ claimed his first four of his fourteen victories in. Although other aircraft are mentioned, the majority of this article addresses the RAF SE5a in service with 84th Squadron.

The late Dieter H.M. Groschel and Elimor Makevet are up next with Part II of an article on the Royal Prussian Flieger-Abteilung 301’s activities in Palestine during WWI. This article includes 55 period black and white photographs along with five black and white maps over 33 pages. The last two-thirds of this article is a continuation of Appendices and Notes from Part 1, and ends by claiming “to be continued”, so its quite possible that a Part 3 is in the future. Page 52.253 displays a period photograph of Ltn d R Hermann Kunz seated in his Albatros D.V (or D.Va) on the Western Front in 1917. The page’s text is part of Appendix E that addresses “Weekly Reports” that were issued by FA 301. Interestingly, the report below this photograph addresses an observation balloon claimed to be shot down by Kunz, with the comments noting that this ballon had been “Booby Trapped” in the hope to kill the aerial attacker.

Ian Burns concludes Floatplanes Over the Desert: The Adventures of l’Escadrille de Port Said, 1914-1916 with Part 3 that presents the Appendices and Notes from the first two parts to this tale. This 6-page article includes 3 black and white photos.

Paul R. Hare presents a biography of Capt. Baron Trevenen James. This six page article includes seven-teen black and white photographs. A born leader, B.T. earned his Royal Aero Club pilot’s certificate (#230) on June 1, 1912, after spending only four days in training. Attached to the Flying Crops, B.T. provided AM James McCudden his first flight in an aeroplane in May 1913. Wireless experiments had initiated in 1908 in captive balloons and by 1910, a Marconi set transmitted observational reconnaissance from a Bristol Boxkite. The onset of WWI in August 1914 saw B.T. James attached to 4 Squadron and flying one of three wireless equipped aircraft, a RAF BE2a. Page 52.281 depicts three RAF BE2 aircraft that were equipped with wireless, with the BE2a (241) shown at the bottom of the page. Sadly, B.T. James lost his life in this aircraft when on an artillery observation mission, he took a direct hit from a shell.

Joe Moran highlights market news and Bob Gladding scratch builds a 1/72 Nieuport Hydravion VI Floatplane. Joe Moran builds (and rigs) Valom’s 1/144 Albatros D.V and D.Va kit set. David Hearn jumps in this month with a build of Arm Hobby’s Fokker EV/DVIII kit, and not just one, but four! The Bookshelf section is a review of WWI aviation specific books and magazines with this issue totaling thirteen.

As usual, this is another excellent issue from Cross & Cockade and I am always impressed with the quality of the articles, both from a research perspective, and readability. The period pictures, maps, and drawings in this journal come off looking great thanks to their printing on the journal's glossy paper. If you are into early / WWI aviation; this journal is an incredible source of information that will have you on the edge of your seat waiting for the next issue. My thanks to Cross & Cockade International and IPMS/USA for the chance to review this great issue.