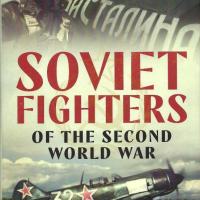 I counted 203 black and white photographs, 17 color photos, 58 color illustrations. The color profiles by Michal Sekula are primarily side profiles, but scrap, top, and bottom views are also provided. The front cover features a color (or colorized) photograph of Boris Safonov next to his I-16 of the 72nd IAP of the Northern Fleet during the summer of 1941. The bottom of the front cover shows off a color (or colorized) photograph of a 21st IAP La-5F taking off on the Leningrad front in the spring of 1944. The rear cover features a color illustration of Snr Lt Aleksander Ivanovich Vybornov’s Yak-9T of the 728th IAP on the Ukrainian Front during the autumn of 1944.

Following on his 2019 reference on Soviet Bombers of the Second World War, Jason Moore presents this tome on Soviet Fighters. Jason Moore focusses on only Soviet built fighters (thus excluding Lend-Lease aircraft) and only those that really served in World War Two. The beginning of World War II saw the Soviet Air Force equipped with now obsolete aircraft, Polikarpov’s I-16, I-15bis, and I-153. The Soviets had realized that the Air Force desperately needed moderation and requested bid for new aircraft designs in 1939. Four aircraft were submitted to this request, with three showing promise to move forward: the LAGG-3, MiG-3, and the Yak-1. The bulk of this book covers the development and service of those three fighter programs, along with the Polikarpov efforts that the Soviets opened the Great Patriotic War with. The contents listed below just reinforce how thorough this book is.

I found the section on the Yatsenko I-28 quite interesting. Designed by Vladmir Yatsenko, the I-28 was first flown in May 1939. A major design feature was the inverted gull-wing, to reduce the landing gear height, and with the wing evoking the United States’ Vought F4U Corsair. Originally designed to utilize a 1,500 hp radial engine, it instead flew with a 930 hp M-87 engine. The program was terminated after the completion of two prototypes and five pre-series fighters. The Yatsenko fighter was the only one of the four fighters built to the 1939 order that failed to progress forward.

Jason Nicholas Moore’s Soviet Fighters of the Second World War is not a quick read, but it is an excellent reference on the Soviet Air Force’s fighters of World War Two. You will find plenty of information on the four major Soviet fighter design bureaus, including data on some of the lesser known fighter aircraft. Jason Moore identifies all the variants that were developed, although maybe not necessarily successful. You will also find each variant’s service record detailed by campaigns during the war. Michal Sekula’s color illustrations and the color photographs are also helpful since so few Soviet aircraft survived the scrap bins. If you are interested in Soviet aircraft, this is an essential volume for both the aviation historian and the scale modeler.

My thanks to Casemate, Fonthill, and IPMS/USA for the chance to review this great book.