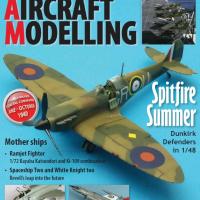 Andy McCabe builds Revell's 1/144 747-8F in Cargolux markings. The kit is built on a stand with an excellent paint job. Airliners and cargo planes never seem to get enough attention and this is a wonderful article covering just such a subject.

Meng Models 1/72 Kayaba Katsuodori Ramjet fighter is built by Mike Williams. Not only does he do an excellent review of the kit, he fits it to a modified Ki-67 turned into a Ki-109.

Gary Hatcher builds Trumpeters 1/48 Supermarine Attacker FB.2 using Aires wheel wells, Airwaves PE and Xtradecals markings. One thing Mr. Hatcher noted was the incorrect landing gear and that can be corrected by a SAC set. The finished results are excellent.

Neil Robinson does a two-fer of a "Dunkirk Duo", Airfix's 1/48 Spitfire Mk. I and Hurricane Mk. 1. Both are built OOB except for some aftermarket seat belts. Both also have night, white, and aluminum bottoms which look great

The Aircraft in Profile is for the North American OV-10 Bronco and has 16 schemes along with 1/72 three view drawings. Also included is an excellent modelling section with available kits, aftermarket and decals. This is superb timing with the wonderful Kitty Hawk releases.