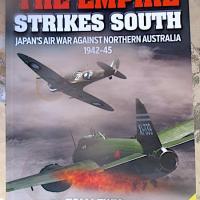 The book deals with the Japanese attacks on various bases and towns in Northern Australia during World War II. After the Battle of the Coral Sea, the Japanese had apparently decided not to try to invade Northern Australia, as they were having too hard a time in the islands to the north. They did carry out a series of air attacks against Australian targets through 1944, using Navy and Army aircraft in substantial numbers. The book details every attack, telling what aircraft and people were involved, the effect of the raids, and the losses and casualties. The Allied side is also discussed in detail, showing the effect radar had on interception, and the limited success of the Allied Spitfires and P-40’s against the Japanese Nell, Betty, and Helen bombers, and also against their Mavis and Emily flying boats. In addition, the Japanese began to use reconnaissance aircraft to help the bombers and fighters navigate to their targets, and to photograph the results of the bombing.

The Japanese raids originated in the islands to the north, former Dutch territory. After the first carrier raids, which ended after Coral Sea, all raids were land based. One interesting fact was that the Japanese raids were usually not very effective, and most of their bombs landed outside the target areas. Few aircraft and military targets were destroyed, and also, losses to Australian and American fighters were fairly low.

The book goes through the entire series of raids, telling what units were involved, aircraft types, and pilots and crews, and how many aircraft were lost, and the fate of the crews, when known. The same information is provided for Australians and Americans, and the conclusion of the book deals with the ultimate fate of the Japanese who died over Australian territory or who were captured and made POW’s.

There is a lot of fascinating information in this book, and it is not like most accounts of military campaigns. Strangely, one reason for the book, was to provide information for the families of Japanese crews who were killed in the attacks. Quite a number of Japanese planes crashed on Australian soil, and most of these remains have been found and recovered. Others crashed at sea, and although most of the crews have been identified, few have been located. At the end of the book, there is an itemized list of planes and crews lost, and their fates, if known.

The author mentions that the average Australian knows little about these actions, as they took place in very remote areas of Australia, although the further north you go, they become more familiar. I found that when I spent time in Australia almost 60 years ago, lots of Australians seemed to remember that the “Yanks” were pretty helpful in keeping the Aussies from having to learn the Japanese language, and when I would enter a pub in Queensland, I found it difficult to pay for a beer after they heard my American accent. I found that the Australians liked Americans, and I liked them. A great bunch of people.

One other thing that would appeal to modelers is the series of color profiles and three-view drawings of the aircraft involved in the actions, showing colors and unit markings clearly. So the book will appear to both historically minded readers and modelers. What more could you ask for. Highly recommended.

Thanks to Casemate Publications and Phil Peterson for the review copy.