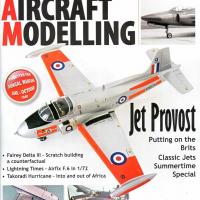 Scale Aircraft Modelling's July 2015 issue focuses on some of the classic British era with everything from new kits, scratchbuilds and older kits.

The articles start with a test shot build of Revell's 1/72 C-54/DC-4 by Andy McCabe. The over 300 parts are assembled into a gorgeous military transport and the kits looks to be a must have.

Rick Greenwood builds Kinetic's 1/48 AMX kit and reports the overall fit of the kit is good but he did sand down the slightly pronounced rivets on the rear of the plane. He also reported a slight color issue with some of the decals but the result is very good.

Valom's 1/72 Bristol Bombay Mk. I is built by Ernie Lee. This is a mixed media kit with limited run plastic, resin engines and photoetch frets. The finished kit is nice and I love seeing an unusual build.

Tony Grand scratch builds a 1/72 Fairey Delta III. Mr. Grand shows how the fuselage was formed with a side profile and cross sections. Balsa wood was used to form the wings and nose and then entire plane assembled using some spare parts from other kits. The article has a dearth of detail and is worth the price of the magazine.

One of my favorite articles is Richard Bolingbroke's build of Special Hobbies 1/48 AF-2S Guardian. The end result is I need to buy one!