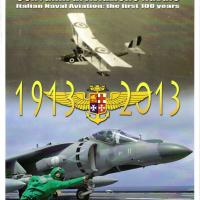 Unlike Aviation Collectables other monograph titles, this volume celebrates the 100th Anniversary of Italian Naval Aviation. This is a square back soft cover that includes 128 gloss paper pages. The text is in two columns, one in Italian and one in English. All picture captions are also bi-lingual. I counted 165 color pictures and 23 black and white photographs. You will also find 169 color patches and insignia. There are also ten aviation color side profiles by Mauro Cini.

Stefano Reduzzi kicks this history off with early pioneer Mario Calderara who became Italy’s first licensed pilot. Mario Calderara built the first Italian Naval aircraft, achieving flight on June 8, 1912. Admiral Thaon Revel officially instituted the Royal Navy Aviation Service Regia Marina on August 25, 1913. Subsequent chapters lead the reader from World War I all the way up to the 2013. This includes a preview of the future (as of 2013) inclusion of the Lockheed F-35B Lightning II. The bulk of this volume is focused on the Italian Navy’s rotary wing aircraft and their unit histories and there is nice healthy section on their current fixed with component of Harriers. The Navy’s goal is to replace the aging AV-8B+ Harrier II but political battles between the Italian Air Force and the Italian Navy are ongoing. The two Appendixes cover the 2013 Italian Naval aircraft and ship specifications in service. The sections include:

I found many sections of this story very interesting, but one stood out. This section was on Air Section P.180 as the Italian Navy acquired three twin turboprop Piaggio P.180 Avantis for reconnaissance, maritime patrol, ambulance, cargo, and VIP support. The three aircraft have been set up to be able to change missions as quickly as two hours.

I was able to read this book over several nights, with a lot of time studying the photographs. Both the contemporary and modern color photographs are clear and well printed and support the text well. This volume certainly gives the reader a good perspective of the first one hundred years Italian Navy Aviation. Models are available for most of the fixed wing aircraft covered from the Macchi M.5 seaplane, to the Curiss SB2C Helldiver, up to the AV-8V+ / TAV-8B Harrier II. Rotor-Heads are also able to participate with Augusta-Bell AB.212s, Augusta –Westland EH-101s, and Sikorsky SH-3 Sea Kings. Caracal Models, CTA Models, and Tauro Model decals are available for Italian Navy markings.

My thanks to Aviation Collectables Company, Casemate Publishing, and IPMS/USA for the chance to review this great book.