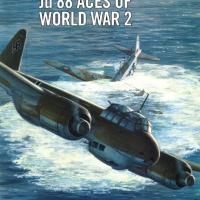 Illustrator Jim Laurier, a native of New England, provides the color profiles. Jim has been drawing since he could hold a pencil and throughout his life he has worked in many mediums creating artwork on a variety of subjects. He has worked on the Osprey Aviation list since 2000, and has been featured in hundreds of aviation books. Jim prefers working in oils on canvas and has specialized in Vietnam War era aircraft. He currently lives in New Hampshire. You can find his art work at https://www.aviationarthangar.com/jimlaurier.html . Check him out!

Osprey's 133rd book in the Aircraft of the Aces series is a square back soft cover including 96 gloss paper pages. The front cover features a color painting by Mark Postlethwaite of Oberleutnant Dieter Meister flying his Junkers Ju 88R-2 downing a Wellington XIII on August 13, 1943. I counted 76 black and white pictures and two tables. Jim Laurier contributes the 30 color side profiles in the Color Plate section.

The original role for the Junkers Ju 88 was as a Schnellbomber, or a bomber so fast that it could out-run any fighter that it might encounter. A protracted development due to technical problems impacted its introduction, but the Schnellbomber became one of the Luftwaffe’s most versatile aircraft. Over 16,000 aircraft came off the Junkers Ju 88 assembly line between 1936 and 1945. They served as bombers, dive-bombers, torpedo-bombers, reconnaissance platforms, Zerstörer (heavy fighter), night fighter, and finally, as a flying bomb in the Mistel role.

Robert Forsyth opens up with the development and initial combat sorties of the Ju 88A Schnellbomber starting in the Battle of Norway through the Battle of Britain. Most of the Ju 88A sorties were focused on dive bombing, in support of the horizontal bombing performed by the He 111 bombers. Chapter Two introduces the solid nose Ju 88C heavy fighter / night fighter as Ju 88Cs drew its first air-to-air blood in the Battle of Norway supporting the Ju 88A dive bombing efforts in April of 1940. Two Wellingtons involved in the RAF attack on the German battle cruisers were shot down by Ju 88C-2s on April 12, 1940, within minutes of each other. Robert has done his research, differentiating between claims and actual kills by examining records from both sides. I really enjoyed his use of first person accounts as they put you in the heart of the battle. The development of the Ju 88C as a night fighter follows in the autumn of 1940. Development continued to where the Ju 88G would serve as a dedicated night fighter.

The Ju 88 expanded its role as a versatile airframe in the East against Russia. Tactical bombing techniques, in conjunction with strafing, led to the destruction of Russian ships, locomotives, trucks, tanks, and bridges. The first half of Chapter Four focuses on the Schnellbomber’s role as a reconnaissance aircraft. The Ju 88D was modified by loading cameras into the rear bomb bay with the front bomb bay carrying additional fuel. The Allied response to the threat of the Focke Wulf Condor brought the Ju 88 to support the defensive and offensive effort in the Atlantic. Based in western France, the Ju 88 adapted to a new role to support the protection of German U-Boats while managing to battle Allied shipping and anti-submarine patrol aircraft. Robert Forsyth continues to cover the other activities of the Schnellbomber, including its use as a torpedo bomber. The contents include:

Robert Forsyth provides a very readable text with plenty of photographs. The color side profiles from Jim Laurier are aptly described in the Appendix. I was able to read the book easily over two evenings. I really enjoyed the detailed operational accounts and the inclusion of first person perspectives that Robert included. If you own one the previous releases in the Aircraft of the Aces series, you know what you are getting. If this is your initial entry into this series, you will be quite pleased.