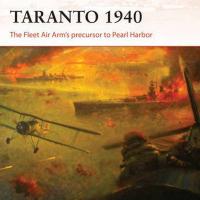 Many modelers have a general knowledge of the Royal Navy’s air attack on the Italian base at Taranto and its outcome but are sketchy on the finer points. So, you have bought one of the new, marvelously detailed kits of the Fairey Swordfish “String bag” and all the aftermarket goodies for it, but the last particulars are not clear in your head. This full-of-specifics history will tell you not only the scope and swoop of the Mediterranean naval campaign of the early WWII years, but exactly who flew which aircraft, its unit and letter/number designator and the weapons load. Did you know that the planes flew off with only two crewmen each rather than the usual three? And why? This book will tell you. But, I get ahead of myself.

In 1940, Britain was fighting WWII alone. The Med was a key to maintaining a standing in Egypt, the Western Desert, the Middle East, Suez and communication with India. Admiral “ABC” Cunningham had to stretch his resources to cover convoys and protect them from Axis air based in Italy, Sardina and other islands, as well as from the Italian surface and submarine forces. To cut the odds a bit, he resurrected a war plan originally drafted by Admiral Fisher’s staff in 1935 after the Italian invasion of Abyssinia. That plan was about a carrier launched air strike on the main naval base at Taranto -- Code Name MB8, the subject of this book.

The sections of the work are:

For the American reader, it is no small matter that the Japanese took note of the Taranto success in planning to defeat the US Navy by an air attack at the base at Pearl Harbor. The Fleet Air Arm used less than two dozen aircraft; the Japanese used over 350 from six carriers.

This reviewer recommends this book with an enthusiastic “Thumbs up.” The author has written some 80 books, 60 of which are available from Osprey publishing. Many thanks to Osprey for continuing to publish these informative books. Thanks to Dave Morrissette and Dick Montgomery for all their hard work with the review crew and for letting me review this book.