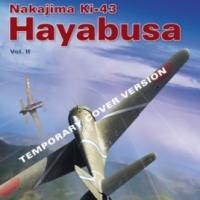 Nakajima K-43 Hayabusa, code-named Oscar by the Allies, was the Imperial Japanese Army’s equivalent of the Zero fighter in service with the Imperial Navy. In combat units, the machine replaced the aging Ki-27. Manufactured in large numbers, the fighter remained in frontline service until the end of the war. By the time its final version entered production, the development of its successor – the Ki-84 – had already started. The Ki-43 was a very maneuverable machine, but in many areas it was inferior to its adversaries. Despite its fragile design, poor armament and almost no armored protection, the Ki-43 was well-liked by the Japanese pilots and it became a symbol of the Imperial Japanese Army Air Service. Hayabusa was the pinnacle of the Japanese fighter design development until the lessons learned in the Pacific laid the ground for new approaches to the construction of tactical aircraft.

Each page has anywhere from one to three black and white images with accompanying text. The images in some instances are a bit washed out and grainy, but still offer some detail. Several of the images reveal the notorious poor paint applied to Japanese military aircraft. Good examples for the scale modeler. The back cover and last four pages show full color plans with right and left side views of Ki-43-I, and -II models.

There are no chapters per se, but headings at the top of the various pages show the theater of operations.

The many black-and-white images may prove informative to the scale modeler, even though many lack clarity and close up details. The weathering effects on the paint on several of the aircraft shown is interesting. Most of the photos are grainy, but still offer detail for the scale modeler and aircraft enthusiast. I found the cover artwork stunning. Recommended as a nice addition to any aircraft reference library.

I wish to thank Casemate Publications and IPMS/USA for the opportunity to review this publication.