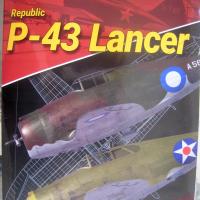 The Republic P-43A “Lancer” was the immediate ancestor of the P-47 “Thunderbolt”, and was only produced in relatively small quantities at the beginning of World War II. Its immediate competitors for production contracts were the Lockheed XP-38, Bell XP-39, and Curtiss XP-40, all of which were produced in far greater numbers. However, Republic made up the differences when they produced the P-47, which turned out to be one of the best fighters of the war. The P-43A was powered by a supercharged Pratt & Whitney R-1830-35 radial engine, and was armed with .50 cal. Machine guns, although lack of self sealing fuel tanks was a disadvantage.

After Pearl Harbor, The AAF commanders decided that the P-43A would not be produced in numbers, and many of them were given to the British, Australians, and Chinese, where their performance was marginal. It is interesting to note that my 1942 issue of the Aircraft Recognition Manual, used by the Navy and upgraded during the war, does not even mention the P-43. The P-43A has been issued in plastic, resin, and vacuform kit forms in 1/72 and 1/48 scale, by several manufacturers, and some of these should still be available.

The book is typical of the Kagero “Topdrawings” series in that it contains minimal historical information, half of one page, in English and Polish. However, the purpose of the book is to provide scale drawings of all of the major versions of the aircraft that were produced, along with some color material. This makes it very useful for anyone wishing to build a model in any of those scales. The line drawings are extremely well done, as are the color profile drawings. The drawings are in three scales, 1/72, 1/48, and 1/32, and these alone are well worth the price of the book.